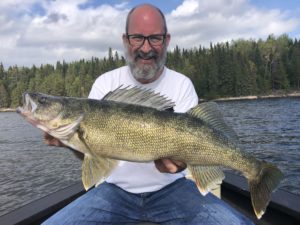 It was a week of warm daytime temps and lots of different wind speeds, but all from the south.  There was even enough heat to generate large thunderstorm systems on three days – unusual for us this time of year.  Despite the temperature change, the lake surface temps remained around 60 degrees, and we found walleye in both shallow transition depths and deep summer water again.

Interestingly, the cold early in September and then the return of warm weather this week seems to have the walleye stuck in between summer and fall.  Just a week ago I would have said we were well on the way to an early fall transition and been searching transition depth structures for big walleye.  Instead, this week we split our time almost evenly between transition and summer fishing again, but the warm weather does seem to have moved the top end fish back into summer pattern depths.  We saw some volume fishing transition, but all of our top end fish were caught out of 25-35 feet of water at classic summer structures.  We also returned to gulp and speed this week.  There were more active fish to be found and gulp at speed was a good volume producer at times, though the big ones came on live bait rigs. The daily guide sheets averaged 20-25 walleye over 18 inches, and for the week we boated 9 walleye over 27 inches, but the top end was still good with 2 – 29.5’s, and an incredibly bulky 31.25 incher. 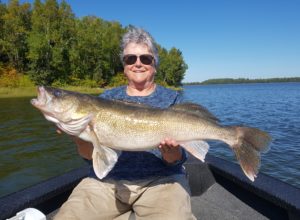 We tallied 56 guided days on the water this week, a little over half that of an average summer week.  And the majority of our groups spent that time in pursuit of big northern.  Steady water temps and some warm, sunny days meant no big change in lake conditions.  No heavy winds to knock down the last of the weeds, and the big pike held to the remaining weed beds again this week.  Some of our favorite fall big pike producing spots are rock – points and outside edges of back bays.  They were just not producing this week; all the bait and all the big fish were in the weeds.  For the week we boated 18 northern over 37 inches, including 4 – 39’s, 1 – 40, and 2 – 41’s.  Blades were what most of the biggest fish ate, and spoons remained the volume producer.