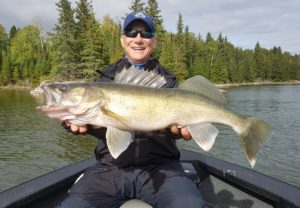 There were a lot of grey skies and cool temps this week.  The cool air temps kept the lake surface temps dropping – lake surface temps were down to the 50’s by Friday.  That’s a much earlier temperature drop than most years.  There has been enough wind to mix that surface water with the rest of the water column, so water temps are likely similar at all our fishing depths.  As the week progressed and the cool weather persisted our best walleye bites moved into deeper water.  Plastics and speed were generally ineffective, and slow and subtle live bait presentations were the method of choice for our guides most of the week.  One interesting note, as we moved to fishing deep water in some of our favorite big fish spots we saw a big surge in the number of fish under 18 inches.  Contrary to our usual pattern, some boats were able to catch big walleye by spending the time to sort through the high volume. 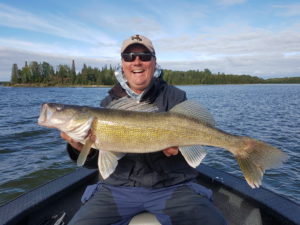 This week we had just 41 guided days on the water, less than half an average week in the summer.  About half of those days were devoted to hunting for big northern, and the top end walleye remained strong for the boats targeting them.  For the week we caught and released 16 walleyes over 27 inches, including 4 – 28’s, 2 – 29’s, and 2 – 30’s.

A lot of our guests this week chose to spend their time in pursuit of big pike this week in spite of the weather.  The heavy north winds from a week ago stripped most open water weed beds away, and low lake surface temps meant northern were just as comfortable back in the bays as on the main lake.  As a result, most of our best fish this week came from sheltered water, in the remaining weed beds.  The big pike were heavily concentrated in those weeds, there were a couple of days mid-week when we moved and saw 4 or 5 big northern for every one we caught.  For the week we boated 13 pike over 37 inches, with 2 – 39’s, 2 – 40’s, and a 42 incher.

Bill Jablonowski and Joel Schneider are a pair our guests that have fished with us in the fall for many years.  They had an incredible week this fall, catching nine “photo walleye”, including two 29 inchers and a gigantic 30.5 incher.