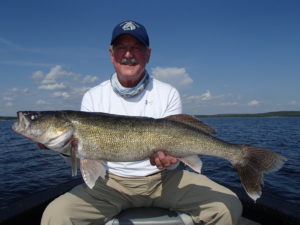 The major weather event this week was a substantial cold front that went through mid-week.  Warm humid weather instantly flipped to high winds from the Northwest, with cool showers, and colder nights.  It felt more like the first week of Sept. than the first week of Aug.  The weather did move the fish around a bit, but overall it was still a good week for big fish and good numbers.

Key depths for the week ranged between 18 – 28 ft.  Both main lake rock and sand produced, but not at the same time.  We are still in the reaction vs. tease tug of war for presentations.  When you encounter neutral to negative walleyes, you can either slow down and grind them with finesse presentations or gear up with big jigs and 6.5 Gulp Nemesis to trigger reaction bites at speed.  Once again, both worked better than running the middle ground for speed and presentation.  The lean for big fish went to the Gulp bite this week.  When guides found a spot that produced a walleye over 25 in. on Gulp, they could often go back and work the area several different ways to pull more big fish from the spot.  The hard part was finding the first big fish.  The others around that one, were much easier. 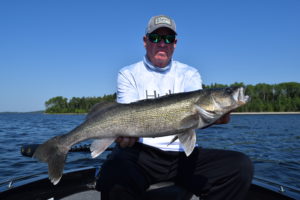 Quite a few guides hunted big pike this week and the results were pretty good.  For the week, we caught and released 10 pike over 37 in., including 2 – 39s, 1 – 40, 1 – 41, and a huge 43 for Drayven Ribbink.  The pattern was good weeds near deeper water and a fast presentation.  Spoons were top producers, but in-line spinners worked as well.

The Take Away:  Some times a big cold front is bad news, this week it just meant that you had to hunt walleyes in different places to chalk a win.