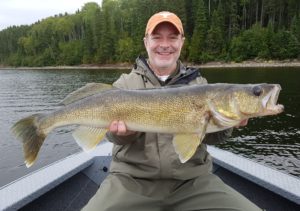 This week gave us mainly stable weather, but unstable fishing.  There were a few days with thunder storms rolling around, but no major weather shifts.  We mostly got steadily cooler day temperatures and even cooler nights throughout the week.   Looking back, we can see a gradual shift in the walleye patterns that tracked with the changing temps.  Over the course of the week there was a steady change of depths and locations where our fish were caught.  Early in the week most of our volume came from our summer locations and at summer depths.  As the week went on some fish were caught at transition depths, but at or near the summer spots where they were the week before.  By the end of the week boats were reporting steady numbers and some good size at many of our favorite fall transition locations.

In previous spring and fall transition times, big weather events like the cold fronts we had last week often signalled a big change in walleye patterns.  I expected the same this year and thought the fronts last week would move the walleye directly into transition patterns.  My boat devoted a lot of time this week to searching for that bite at some of our best fall transition spots, but the transition bite did not really get started until the very end of the week.  This fall the walleye eased in to their transition spots with the gradual temp changes instead of jumping straight to them after the big fronts.

That gradual change in the walleye’s behaviour meant that the fish were spread out between summer spots, fall transition spots, and a lot of places and depths in between.  Our numbers of big walleye caught this week are partly a result of this pattern, but also reflect the reduced number of boats on the water.  Most weeks during the summer we record around 75 guided days, this week there were just 44 guided days on the water.  For the week we boated 15 ‘eyes over 27 inches, and the top end was strong with two 30-inch fish and a 29.5 incher caught by Colton Nash, the youngest angler in camp – just 7 years old.

Our guides started searching for big pike a little more often this week.  We caught and released seven pike over 37 inches this week, with our two biggest – a 41 and a 39 both caught on the first cast as we pulled up to a spot.  What stood out to me this week was the number of big fish moved and seen, but not caught.  For every big pike boated we saw three or more others.  I know I will be recommending that the guests in my boat spend some time casting this week.