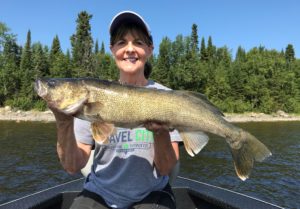 We were due for a hard week and we got one.  The weather was dominated by a massive cold front that hit us on Tuesday.  The forecast on Monday did not sound terrible, but the Low of 7 (45 F) predicted for Wed. night raised an eyebrow.  Weather changes that dramatic are usually accompanied by strong North winds and this one was no exception.  It was a howler on the southern basin and was much worse than the Weather Network promised.

Fires were lit.  Heaters were turned on.  Clothes were dried out.  Below the water, the walleyes scattered and prepared to ignore everything we were going to put in front of them for most of the rest of the week.

Keep in mind that we are terribly spoiled and our guests have very high expectations, so we did still catch many walleyes.  It just wasn’t as fast and they weren’t as big as we expect for this time of year.

One trend that was new for the week, was guides pulling the smaller 4 in. Gulp on ¾ oz. jigs.  It started with guides rigging their own lines with smaller Gulp to increase their odds for shorelunch fish.  That worked, but it also turned out to be a solution for short bites after a cold front.  And the big fish ate them as well.  When the focus was for giants, we still pulled the 6.5 in. Gulp, but after a front, the little tails pulled at .8 to 1 mph were a better solution overall for action.

There was no real key depth.  Many of the big walleyes were caught deeper than 25 ft., but there were also some shallow water bites this week as well.  Main lake rock was better than main lake sand.

With so many repeat guests, they know the big fish are here and that weather is the variable that will have the greatest impact on their relative success during their stay.  Fortunately, most of them are fisherman, so they already know that massive cold fronts alter expectations and results.

This is year 20 for me owning and operating The Wheel, and the biggest difference between the early years and now is that I don’t have to argue and prove the quality of the fishery.