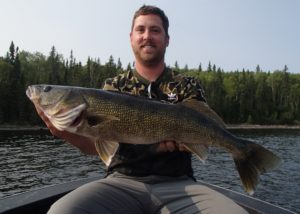 The new normal for weather seems to be variable ….. and weird. I questioned the long-term weather forecast on Monday. I told the crew that in my experience, it is not likely that we are going to see daytime highs of 96 shift to night time lows of 45 without some kind of major front or wind event. As it turns out the weather guys were right and I was wrong.

My parents were fishing with us this week and they always bring their camper up. They were the place to be on Monday night with air conditioning. By Wednesday morning they were working on getting the heater fired up. The mist rising off the lake Wednesday morning was replaced by an erie, smokey haze on Thursday at noon. The smoke was so thick that the sky turned orange and you could look straight at the outline of the sun. The smoke got thicker and then the sun disappeared. When we got off the lake we found out that we had already been on fire ban. I don’t know what the walleyes thought, but it was definitely out of the ordinary for the guide crew.

It feels like we are in a pattern of extremely variable summer weather. What is consistent is the guide crew. Even when the conditions are challenging, the guys work hard to find the pattern that may only last for a few hours. The last 3 fishing reports have focused on variable weather and even though we fished different areas and patterns, we ended with just about the same results for numbers and big fish. For the week, we caught and released 30 walleyes over 27 in., including 4 – 28s, 4 – 29s, and a 30.5 in. monster fish of a lifetime for John Armstrong. Volume was good with guide sheets averaging 30 walleyes over 18 in. per day.

There were still many big walleyes caught from 30 ft., but there was also a pattern that we typically see in Fall frontal conditions. We found walleyes in mid depth, neck down areas with current. This pattern is not one of my personal favorites, but when it produces multiple fish over 28 in. in water 20 ft. or less, I am forced to pay attention. The hard part is there aren’t many fish on these spots. These are a trophy hunter’s gamble – boom or bust. Without good electronics, I would never even fish them. You have to scan before you invest the time.

I would say that the big Gulp Nemesis at speed vs. light jigs on live bait debate ended at 50/50 this week. I hesitate to name a key depth, but 28 – 30 came up more often than anything else at weekly round table meetings.

Missy and the kids are on their way back to Iowa to get ready for school. Meetings are planned for the next construction project and I am getting ready to prepare for my Fall guiding season. It is always shocking to me that the season can go by so quickly.