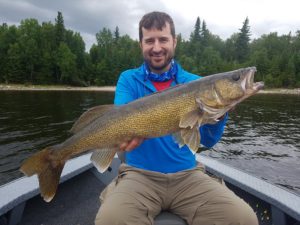 A really good year to date for big walleyes:

Last year we ended the season with a total of 58 walleyes over 29 in.  With many fishing days still left in the year, we have already matched that number of big walleyes for the 2018 season.  Even more significant is that 19 of those 58 fish were over 30 in.

This week was an outlier for weather.  It felt much more like a last week of Aug. or first week of Sept.  It was cool, often showery, and again quite windy.  I left my windows open one night and woke up to a morning low of 50.

The walleye bite was split between main lake rock and sand.  It was also equally split between Gulp Nemesis with ¾ oz. jigs at speed and dead sticking minnows on ¼ s or 1/8 s over neutral to negative walleyes marked on the graph.  It was also split between groups of walleyes in 15 – 24 ft. of water and groups in 30 ft. or deeper.

If you read this report on a regular basis, you are probably tired of hearing that we fished it all…. or conducted multiple experiments each day looking for a pattern to duplicate, but that is exactly what happened again this week.  The one significant difference is that after the cool front, there were a tremendous number of marked arcs that did not want to bite.  Years ago, we would have sat on them or moved on to another group marked.  Surprisingly, pulling Gulp through those fish sometimes triggers a bite that I would not expect.  The take away is don’t let the results of one or two experiments color your impression of the whole day.

At round table, we talk extensively about how a bite changed on a spot or how a group of walleyes moved shallower or deeper in an area as the day progressed.  The hard work is to stay focused and continue to work the problem until you find a solution.

There were several slow spots this week, especially in the afternoon, where getting the big ones to bite was extremely tough.

The unsettled weather did nothing to improve the pike fishing.  Some guides tried, but the results were weak.  For the week, we had 2 over 37 with one 39.

My favorite part of the end of the week is that 2 of my second-year guides Garrett and Gouws smashed their results even though senior guides advised against their strategy or fished past them.  Full disclosure – I was one of the guys that fished past.  They lit it up and and that is the program.  Teach the system and let it work.  Everyone learns all of the time and we all get better.