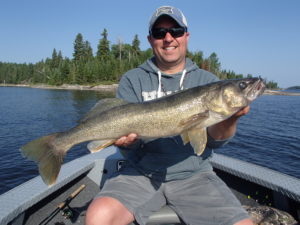 Just looking at a printed report of last week’s weather would lead you to believe that it was just another normal summer week on Lac Seul.  On the water, it felt very different.  A series of really big wind days churned up areas of the main lake basin.  You could find cloudy, clay colored water miles away from shore and surface temps that had been into the 70s dropped into the low 60s.  It didn’t feel like a huge change, but we did see a significant response from the fish.  Groups of walleyes scattered throughout the lake and water column.  And the big pike disappeared.

We found walleyes shallow and deep, but there were also many suspended fish this week.  The biggest change for me was the number of walleyes targeted on screen that were in a negative feeding mood that you just could not get to bite.  Surprisingly, big plastic at speed was just as effective as complete dead sticking with light jigs and minnows.  Overall volume dropped dramatically this week with guide sheets averaging 26 walleyes over 18 in. per boat per day.

There was some effort chasing pike this past week, but the results were zero pike over 37 in.  We didn’t even catch them as incidentals while walleye fishing.

On balance and in reference to previous year’s fishing reports for this week, I would summarize that this week’s results were more normal.  Compared to previous weeks in 2018, I would conclude that we were spoiled with some outstanding fishing results in June and early July.