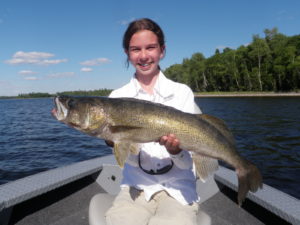 A Week With No Wind

Almost the entire week was sunny, hot and flat calm.  Lake surface temperatures soared into the mid 70s and there were even reports of areas in the low 80s.  The Texans laughed at the criteria for a heat advisory in Northwest Ontario, but we did have 3 days that qualified this past week.

Extreme weather always impacts the fishing.  This week it put the Smallmouth bass bite into overdrive.  It also sent tons of walleyes into shallow water, but the big ones were not represented in the same numbers that you would normally expect.  Volume was high, but the top end took a hit.  The weeds are ahead of schedule, even on the main lake, but it still takes time for the big pike to settle in.

Historically, this week has been the peak of the smallmouth bass bite for the year at The Wheel.  And the flat water and bright sunshine sent all of our top Bass regions into high gear.  For the week we caught and released 80 bass over 19 in., including 5 – 20s.  Top waters, tubes, jigs w/tails, and cranks all had their time and place.  At one point, the photo board in the main lodge was 75% Bass.

Two factors affected the walleye results for the week.  Number one; many anglers were bass fishing.  Number two, there was a separation in the walleye population when they moved shallow.  We caught tons of walleyes in the slot – 25 or 26 in. size, but with the flat calm conditions, it felt like the big girls just didn’t come to the party.  For the week, we caught and released 35 walleyes over 27 in., including 6 – 28s, 6 – 29s, and 1 – 30.  Volume was good with guide sheets averaging 40 walleyes over 18 in. per boat per day.

There is the possibility that our group pattern and approach to walleye fishing is the reason that the results are amplified, but I am still confident that the “extremes” approach is still the most productive answer for most days.  We are still consistently experimenting with finesse, slow long lining 1/8’s with minnows or jumping straight up to 3/8 oz. jigs and 6.5 in. Gulp Nemesis pulled at speed (1.2 – 1.4 mph).  When one result is clearly better than the other, we try to duplicate the pattern in areas with similar conditions.  Most walleyes were caught between 6 – 12 ft. of water this week.  The majority of walleyes 27 – 30 in. were caught in 12 – 20.

With the heat wave and lake levels just a little over 1 ft. lower than normal, the weeds are growing just a bit ahead of schedule.  The cabbage weed beds topping out on the surface on the main lake is one of the environmental indicators that we watch for to key in on a big pike bite.  The typical time frame is July 4.  We aren’t there yet, but it is close.  We had minimal effort spent chasing pike this week, but we still caught 10 over 37 in., including 5 – 38s, 2 – 40s, and 1 – 41.

The Bass fishing was so good this week that even the hard-core walleye hunters broke ranks and spent some time on the chunk rock shorelines.