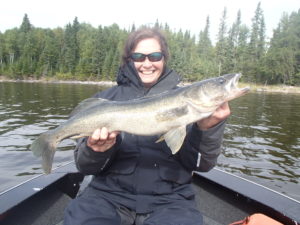 One thing that happens every September here is some fall weather arrives.  A system moved through early this week bringing some rainy days, then some big wind days, and temperatures began dropping at night.  Cooler nights meant lower lake surface temps, and big winds mixed the surface water down.  The result for us this week was similar water temps at a wide range of depths and walleye being found at a wide range of depths too.

Another thing that happens every September is our guide staff shrinks.  Some head back to college, some are hunting, but the end result is we operate with fewer boats on the water and fewer guided days each week.  This week we had just 37 guided days, less than half the average for most weeks.  Our average daily guide sheet had 30 walleye over 18 inches and the crew found 20 walleye over 27 inches, with five over 28 and one 29 incher.

All through the week main lake sand structures were the place to be for pure catching.  These structures might have been a challenge to fish on the big wind days but when boats got there they definitely produced fish.  Over 80% of all our ‘sheet fish’ this week were caught on sand and the week’s best daily sheet had 84 fish over 18” caught on summer sand.  Many of our guides reported walleye at scattered depths on these sand structures – a result of changing lake surface temps.  But as the week progressed and winds moderated we could see a clear separation between volume and size.  Numbers came from standard summer depths on the sand breaks but the bigger fish were found deep.  Rock and sand both produced big walleye towards the end of the week for the boats that committed to fishing deep, but sometimes at the expense of missing out on volume just a few feet shallower.

As with the walleye, the end of the week was much different from the beginning for the boats chasing pike.  Early on the pike were still deep and being caught or seen by boats walleye fishing.  Once the weather calmed down we saw the big pike begin to show up in some of our favourite fall locations. .  For the week we boated 5 pike over 37 inches with the biggest a really thick 41 incher.  Our summer weed patches are beginning to die out and the weather is forecast to be stable, so we’re expecting more big pike to show up in fall locations in the upcoming week

A guide’s takeaway:  We all love it on those great days when you can catch lots of fish and big ones too, but this week conditions really forced each boat to make a choice.  You could target just catching fish or you could target a trophy.  There were very few spots that produced both at the same time this week.