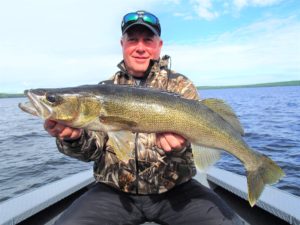 The antidote for a transition cold front scramble is stable warm sunshine and the onset of real summer conditions.  That is definitely not what happened this past week.  Instead, we continued to experience cool conditions, variable winds, and worst of all, nearly daily random rain showers.  Not just rain showers, but successive days of rain for 20 minutes, then a break, then rain for another 30 minutes and then the lake went flat again.  I have been guiding for almost 30 years, but I could have told you on year one that those conditions consistently yielded tough results.  And they did again.

As one of the guides out on the lake this past week, I can tell you that like the other guides, I hunted hard.  I caught walleyes in 3 ft. of water and I caught them in 33 ft. of water.  I used speed and big plastics and caught some and then I hunted with sonar and caught a few with finesse presentations.  I caught fish off of structure that we normally fish in August and I found fish in areas that we normally only use in spring.  Despite all of the creative thinking, the bottom line is that the entire walleye population was dramatically dispersed this week.  When you combine that dispersal with weather conditions that result in few fish biting, then you conclude with a difficult week of walleye fishing.  I am just thankful that I was still on Lac Seul.

There was some effort spent chasing bass and the results were inconsistent.  There were a couple of really good guide sheets, but there were also quite a few frustrated bass anglers.  For the week, we caught and released 29 over 19 in., including 1 – 20.

At our nightly guide round table meeting, I shared my frustration with the week to our first-year guides.  And then, I also reminded them, that all of the groups that are here fishing with us this week have seen the glory days and know that Lac Seul is different and special.  They may be a little disappointed with the week’s results compared to previous years, but they are fisherman and they know that weather still matters.