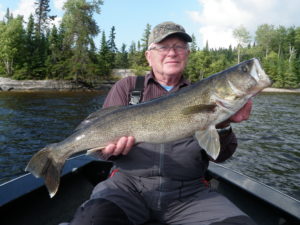 We had our version of a Canadian summer this week.  It never got to 90, but 88 with no wind and no clouds is still pretty warm.  I talked about a separation of walleye populations last week and that trend has continued to be reinforced.  The Guide team is fishing it all; sand, rock, deep, shallow, weeds, flats, etc…  And there are fish on all of those spots.  The trick is to figure out how much time to spend on each option.  The experiments continue, the results shift, and we adjust.

Despite the good results, conditions were far from easy.  There were several consecutive days of flat calm baking hot sunshine.  The most interesting result from the week is that big Gulp pulled at speed with big jigs was just as effective as the absolute opposite presentation of tiny 1/8 oz. jigs dead sticked over deep water arcs.  Every spot was different and the truth is that there were very different results from each guided boat.  Those differences were not correlated to experience.  There were many senior guide sheets, including my own that were a little light compared to some of the first-year guides who spent more time on traditionally productive spots.

Deep water sand was the key to the big walleye bite this past week.  The hard part for me is that I want to be straight forward and honest and inform.  The SWWL guides really do some cool experiments and come up with some really great intel.  I like to share that here, because walleye hunters look to us for information.  What makes my life hard is when multiple readers of that information search for Black boats on Lac Seul and pull up within 10 ft. and then troll closer.  I move on.  It is Lac Seul and there are 10,000 spots.

My mandate to the guide crew is to take the high road.  When you get crowded, move on.  I will admit that it does hurt to watch and see some of those anglers harvesting over slot fish for consumption.  It just does not make sense to me.  If you care that much about chasing big walleyes, then why would you not want to take care of the big girls for the future?

It isn’t fair.  It isn’t cool.  But we are still on Lac Seul.  We are the fortunate few who get to guide on some of the best walleye water in Northwest Ontario.  With our data base of known high quality spots, we don’t have enough time in the day to fish them all anyway.  We never run out of spots, but some days we run out of time.