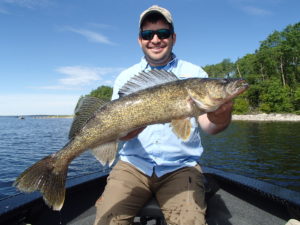 Most years, the third week of June begins the transition to the stability of the summer season.  Not this year.  From nearly beginning to end, we experienced a major cold front, complete with rain, wind, showers, and very chilly temps.  To say that there was a dramatic effect on the fish would be a massive understatement.  The walleyes went deep.  The pike scattered.   And the Bass were all over.  And the guides adjusted.

The real story of the week was how those fish were caught.  Most of the big walleyes were caught between 18 – 26 ft. from summer style locations.  We still caught some nice fish shallower in some of the warm water transition areas, but the tactics changed dramatically between areas and days.  The guides often used search patterns with big plastics on jigs at speed to target aggressive fish while searching for concentrations of neutral to negative walleyes to go back on with live bait.  Depending on depth, we pulled big plastics on every jig size from 1/8 – ¾ oz. this week.  Surprisingly, many of the big ones were caught down deep with aggressive plastic presentations even during the peak of the cold front conditions.

By the end of the week, the most significant observation was the vast difference in the types of areas that were all holding walleyes at the same time.  Walleyes were caught out of back water bays on Mann’s Baby 1 minus cranks at the same time that luncher size walleyes were being caught out of 33 ft. of water on regular summer structure.  The cold front scrambled walleye locations and in between the successful spots there were many, many “blanks.”

Professional guides aggressively searching and then sharing the information gathered is the only reason we did so well this week.  Without a dozen guides on the hunt and pooling their intel, no one would have done well.

We had just one boat hunting big pike this week.  Ed Rosenow did find one 39, but the big pike were very, very tough.

We only have one more day with the Kendal Hartley/Mark Bailey Texas group.  They love to fish smallmouth, but it has been a very difficult hunt.  The wind and weather have been a menace.  For the week, we caught and released 26 bass over 19 in., including 3 – 20s. But It was a very tough week for bass and overall volume was very low.  Wind was an issue.  Dirty water was a problem.  And the bass seemed to be on different schedules in different areas.

The Takeaway:  When conditions are tough, information matters the most.  I am fortunate to work with a bunch of hard core professional guides and they turned this week from a certain failure into a win.