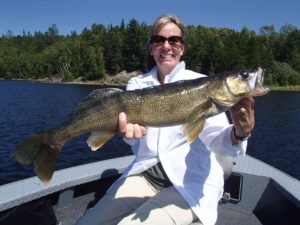 The changes are incremental, but the trend continues as the walleyes are becoming more concentrated.  Earlier in the week, we were still catching walleyes everywhere from 8 – 35 ft., but by the end of the week, the trend was definitely towards the mid – depth zones.  Both size and numbers for walleyes were caught from 18 – 25 ft. by week’s end.

We did see the typical variations between good bites and slow, but overall it was a good week of walleye fishing on Lac Seul.  Guide sheets averaged 35 walleyes over 18 in. per day.  The highest daily total was 77.  For the week, we caught and released 46 walleyes over 27 in., including 10 – 28s, and 2 – 29s.

The majority of walleyes were caught with ¼ oz. jigs and minnows, but there were also some occasional good bites on big jigs with plastics.  Gulp Alive crazy legs jerk shads are still the guides favorite at this time of year and when the bite is on, they do select for bigger fish.  The most difficult decision to make is when to invest the time dragging plastics at speed (1 – 1.4 mph.)  A few of the guides employed a “compromise” approach and used 3/8 oz. jigs and live minnows at a medium pace to cover ground on sand flats and had relatively good success.

Relatively few groups hunted pike this week and the results were mixed.  There were some nice fish caught on spoons and spinnerbaits in main lake weeds near deep water, but there were also quite a few groups that reported tough pike fishing days as well.  For the week, we caught and released 7 over 37 in., including 2 – 38s, 1 – 39, and 1 – 40.

The only other take away from the week that can’t be explained by any stat or report was the “camp” atmosphere.  Groups are here from various backgrounds and areas but there is a noticeable click with returning guests.  We shared premium Russian vodka in the lodge at supper, had another great 9 iron competition with a floating raft target in the bay, and many enjoyed the “Hall and Oates” party on the deck.   I was in the office, but our guests told me it was a great time.