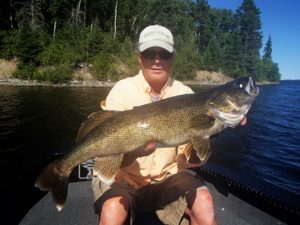 The walleyes are finally fully on summer patterns.  Both main lake rock and sand held fish with most being caught in the 20 – 30 ft. zone.  There were some high volume days with a large amount of slot fish to just over the slot fish mixed in with some big ones.

For the week, we caught and released 54 walleyes over 27 in., including 9 – 28s, 4 – 29s, and 2 –  30s.  We did find a couple of big fish patterns with groups of larger walleyes relating to mid depth flats adjacent to deep water.  One of the keys to this pattern was that there was a constriction or bottle neck between a large fertile back bay area and a main lake basin.  Quality electronics were a requirement for this bite.  You just can’t move that slow over a large area with very little structure and hope to contact that many fish.  The guides scanned with electronics.  Located a key depth and then stayed on top of the fish.  It wasn’t fast, but it was a high quality bite.

Guides gave their guests choices this week.  You could head out to traditional main lake structure and sort through the small and medium sized fish or you could slow down and work one of the mid depth summer transition zones and hunt for just big ones.  Most guides chose to do a little of both each day.  Overall volume was high with daily guide sheets averaging 40 walleyes over 18 in. per boat.

Big plastics and jigs were used occasionally with moderate results.  Often, guides were searching structure while pulling plastics and locating groups of fish to go back to with live bait.  Jigs in ¼ – 3/8 with minnows were by far the most productive presentation this week.

The days are getting shorter and the mornings are getting cooler.  Summer isn’t over yet, but the first hints are there.