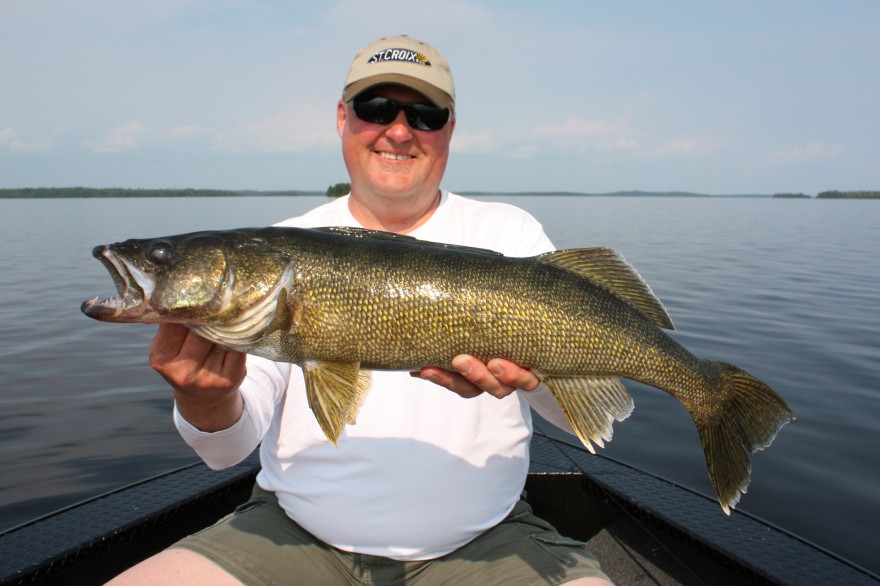 There were many changes at the Wheel and on the south shore of Lac Seul this week. Walleye fishing volume remained high, but there was a split in the size classes of fish that became more pronounced at the end of the week. The weather was fairly consistent, hazy and warm and we watched many groups of walleyes trend shallower on main lake sand and rock. There wasn’t a full on weed bed invasion, but many slots and eaters made their way to the deep side of the weeds. The really big walleyes stayed out deep and even trended a little deeper. The split in the groups of fish required the guide staff to shift strategies and give guests different options. One of the options was to go chase pike and many groups did so successfully. The ratio of walleye to pike effort changed from 90 – 10 to 60 – 40.

The most significant difference for me was a changing of the guard. Jesse Wright guided his last day on Aug. 5 and went out with a bang. He put a net under a 40 in. pike and a 29 in. walleye. Guides and guests will miss him immensely, but I will miss him the most. He was an integral part of my guide staff management team and brought a level of care and passion to the program that was infectious. He will still be working on Go Pro footage and videos and we will see what the future holds for guest appearances. At the same time, Senior guide Dave Suggitt returned to the ranks and will be with us until early Sept. As much as I hate to see Jesse go, it is great to have an esox fanatic back on staff again. It shakes up the program and makes us think differently about the guided day.

I guided Billy Brindle this week and we always fish walleyes straight time looking for big ones. He topped out with a 28, but on a slower afternoon, I asked if they wanted to mix it up and throw for pike. They said yes and had a blast. Action was great and we topped out with a 37, but it was a surprise to me how much our southern bass fisherman enjoyed the change up and excitement of casting for pike.

For the week we caught and released 16 pike over 37 in., including 1 – 39, 4 – 40s, 1 – 41, and 1 – 43. We continue to find more deep weeds and the action for casting was great. Spoons and in-line spinners worked, but many weedbeds were so thick that you just had to throw spinnerbaits or Johnson’s silver minnows to get through them.

Walleye volume remained high with guide sheets averaging 45 walleyes over 18 in. per day. The highest daily total was 67. For the week we had 30 over 27 in., including 10 -28s, and 3 – 29s. Groups had to make a choice between spending time shallower and catching volume or heading down deep and fishing for big ones. The big fish hunt was more difficult than normal, because many of the small to mediums that keep your boat interested had moved shallow. Many guests say they want to chase big fish until they have spent 20 minutes on a spot without a bite.

Gulp and big jigs were effective about 5% of the time and that was just enough to suck me in one time too many. Jigs and live bait were the main stay. We used ¼ oz. jigs when we could and we geared down to 1/8ths when we had to. A full 50% of walleyes caught this week came on 1/8ths. That alone should give you an idea of what the bite was like. Lots of risers, moving, and work to put the fish in the boat.

Change is a challenge, but it is inevitable. This week was a game changer and next week is likely to be one too.