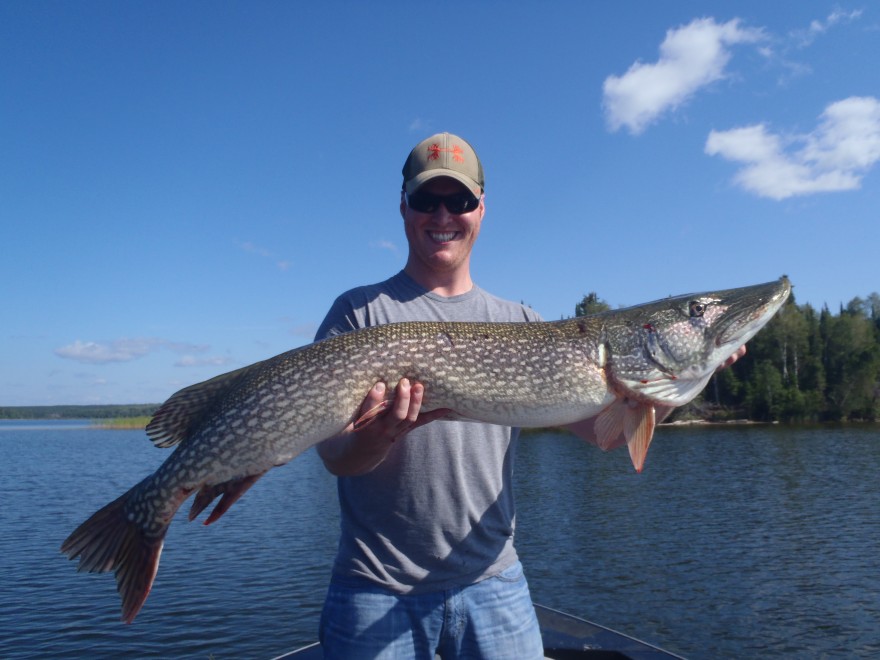 It may only be August 23rd, but it sure feels like fall has arrived at Silver Water Wheel. For us that means the days are getting shorter and the nights are getting cooler, but what really brings it home for me is members of our guide staff giving their last daily “round table” report of the season.

The first of our younger guides headed back to college today, more are due to depart shortly, and Mike is heading back to Iowa. Every year around this time I get started thinking about fall fishing trends, and one of the first trends I get eager to focus on is big pike becoming active in the weed beds again.

Towards the end of August and beginning of September here on Lac Seul we usually see the big pike concentrating in smaller areas as the weeds begin their fall die off and the number and size of weed beds begins to shrink. And with cooler nights bringing surface water temps down the bigger fish are often more responsive than they are on hot summer days – chasing baits fast and coming back to strike at them multiple times.

Well, when you combine guides expecting a big pike trend to start soon with a day that really needs a subtle presentation to generate success with walleye, what you get are guides encouraging their anglers to spend part of the day chasing big pike. And there were some anglers fishing with us this week that preferred the big pike hunt to finessing walleye, so the guide crew spent a little more time than usual looking for big pike. As a crew we tried a few different tactics, but the boats that devoted most of their time to working deep water adjacent, main lake weed beds with spinner baits and spoons were the ones that produced the big fish. For the week we caught and released 13 pike over 37 inches, but the real story is a giant 47.25 inch northern caught by Darrick Werner! Very close to matching the new lodge record set earlier this season.

The weather was mixed this week. We had a bit of everything – sun, cloud, warm days, and cool days and winds were light and variable. With changing weather and a different wind each day – and sometimes each hour – to me it felt like there wasn’t any reason for the walleye to concentrate in any one area or become active. To get ‘em the guide staff targeted the spot on spot, had their anglers using 1/8th oz. jigs, and moved the boat slowly most of the time once again this week. Most days some boats devoted a little time to checking for more active fish, pulling gulp or just moving more quickly with live bait over larger structures. But every boat ended up returning to light jigs presented at slow speeds to generate their success this week. For the week we caught and released 37 walleye over 27 inches, including 9 over 28 inches.