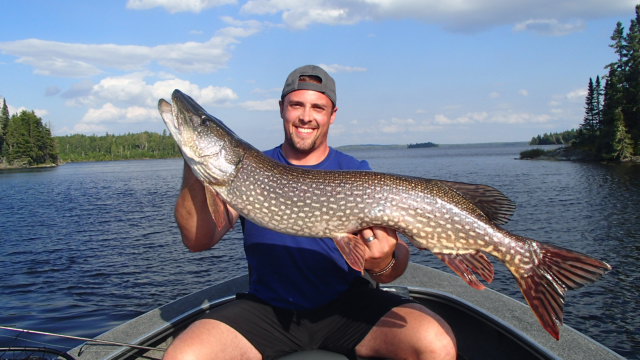 Weather was consistently good and so was the fishing this week on the south shore of Lac Seul. There were some tougher bites when the wind laid down in the afternoon and there were times when you had to gear down to lighter jigs to coerce a bite, but there were also a couple of windows when the walleyes really popped. If there is such a thing, it was an average week of great fishing on Lac Seul accompanied by beautiful weather.

The key question that senior guides wanted to know at round table meetings was the depth that walleyes were caught. The rest of the variables were secondary. There were nice fish caught off deep rock and deep sand this week, but there were still some big ones on the top of the break. For every 27 caught deep, there was at least one caught in 18 – 28 ft. One of the largest walleyes of the week was caught pitching up into 8 ft. of water on a main lake rock point. I cannot stress enough how important it was to find the best depth for the hot spot to have a successful day.

In seasons past, I have written a great deal about fishing at speed with big jigs and Gulp to cover water searching for big walleyes. There were a few windows this week where that technique was successful, but there were many more where it wasn’t. One of the observations that has been mentioned often at round table meetings this year is the amount of big smelt that we are seeing walleyes cough up when they are caught. It is purely speculation, but this may be part of the equation as to why we can find and mark so many fish at times and yet still have reluctant biters. Whether it is related to smelt or not, there is a definite trend. Spot on spot fishing is the tried and true way to solve that problem, but “Spot and Stalk” is now the hot trend for consistently successful guides.

You have to prep your guests for “Spot and Stalk” sessions. We loved the spot on spot areas because they concentrated fish. The alternative is to identify big fish on flats and use Gulp style tactics to cover water, find them, slow down and catch them. Two major strategies have evolved. One is basically long lining ¼ oz. jigs with live bait at speed for walleyes that are suspended above sand flats. We don’t move as fast as we do with Gulp, usually .5 – .7 mph, but you can still cover ground. I like to think of this as “Gulp Lite.”

The other method is what most of the guide crew refers to as spot and stalk, and that is put the boat in reverse and move at 2 – 4 mph watching your graph until you locate a pod, pop the boat into forward, tell your guys to drop 1/8 oz. jigs and try to pick off a fish or two. Lose them and off you go again in search of another group. The better you are at identifying big arcs gives you increased odds at concentrating on pods of big fish. Almost all of the fish on the flats are at least a little suspended. We are constantly advising either 1 full crank up or 2 to get the baits between 2 – 4 ft. off the bottom. It is an active and fun way to fish and most importantly, it works. (It is far more fun than dead stickin 1/8ths.) Quality electronics are mandatory. Today’s high tech color Lowrance HDS sonar/GPS units are the most important tool that we use to make this technique work. You have to know which arcs to work on and which ones to ignore.

There were some groups slinging for pike in the afternoons and their results were good. Volume in the weed beds was generally good, although there were a few slow days. Big fish numbers were also solid with 11 over 37 in., including 3 – 40s and 1 – 42.

Over the years, I have been asked many times why there is such a dramatic change in guiding tactics between years. I had a few groups suggest that it was a way to sell different types of tackle, but the truth is that we constantly and aggressively compare old tactics with new. Call it a “free market” approach to walleye guiding. We love what worked in the past, but when it stops working, we are moving on, because we know the big fish are there and we just need a different tool to catch them.