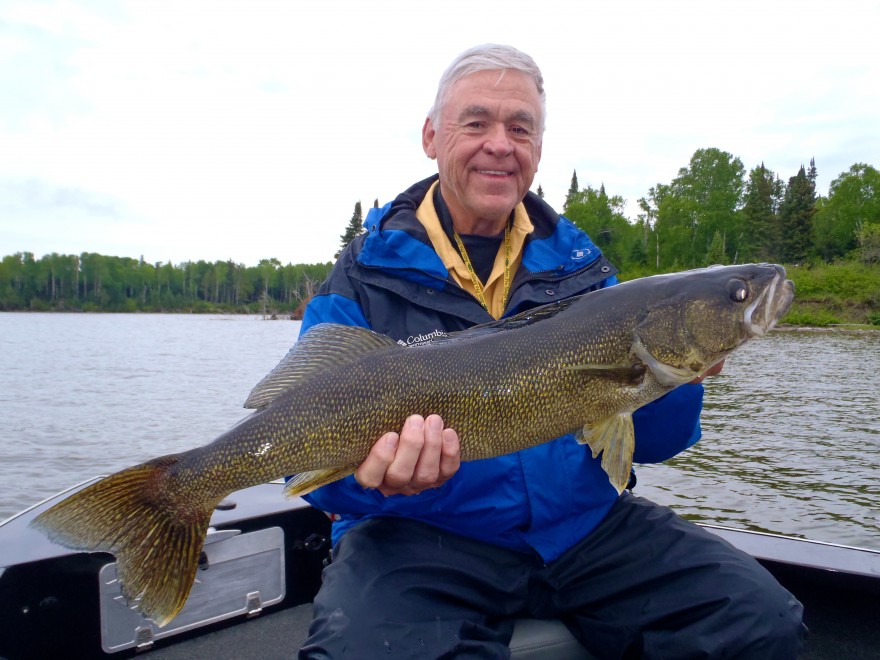 Historically, the second week of June has been a time of transition for both weather and fish movement on Lac Seul. The weather was normal this week, but the fishing results were extraordinary.

The lodge record Northern Pike was broken this week when guide Kevin Mifsud landed a 47.5 in. monster. The second largest pike this week was a 45.

There were 28 walleyes over 27 in. caught in one day at the lodge.

One guide boat reported 24 walleyes over 24 in. for one day….

These are just a few of the details that help describe the quality of the fishing despite the fact that Thursday was an absolute “blow out” day and that Friday was “post frontal.” We still caught fish on those days, but 30 mph wind driven rain with High temps in the 40s made for some tough fishing conditions. We still caught fish on Friday after the front passed, but we did not see as many big fish.

What that means is that almost all of the top end production came from the first half of the week when the weather was “normal” and the fishing was awesome.

Walleye volume was excellent this past week with guide boats averaging 40 over 18 in. per day despite the blow out days included. There were several distinct groups of fish that the guides targeted at different times. We are still finding numbers of walleyes and some big fish in the traditional warm water bays, but the guides are also finding large groups of bigger fish already located on main lake transition spots. Walleyes in the typical spring areas were caught from 6 – 12 ft., but main lake fish were holding one level deeper at 10 – 20 ft.

There was some effort made to check the progress of smallmouth bass movement into the shallows. A few fish have moved up, but most are still off the first break in 8 – 12 ft. This week’s storm further slowed the mass bass migration into the shallows. The next sunny warm stretch of weather will flip the switch. Most of the big bass this week were caught as incidental catch while walleye fishing. For the week, we had 22 over 18 in., including 5 – 19s and 2 – 20s.