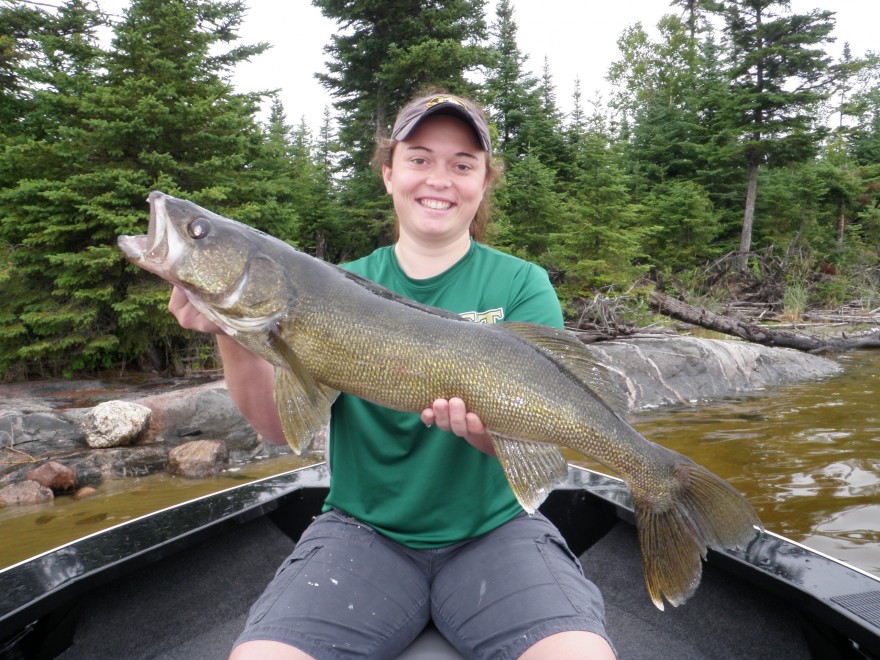 It was a week of variable weather with constantly shifting winds that ended with a sharp cold front. The forecast for tonight is for lows of 48 degrees with brisk winds. The week began with some quiet periods with flat calm conditions. During the middle of the week, we had a different wind direction every day, so there never was a consistent pattern for locations.

We keep expecting to see the walleyes make the move to deeper water, but this week consistent action and big fish were caught in 14 – 18 ft. of water. There were a few fish found deeper than 20 ft., but the main lake sand structures have been dead. Main lake rock and windblown rock/sand transition were definitely key to this week’s success.

Production was once again split just about evenly between ¼ oz. jigs and minnows and Big jigs with Gulp Alive Plastics. The guides have been backtrolling plastics between 1 – 1.5 mph.

It was another great week for big walleyes. We caught and released 83 over 27 in., including 17 – 28s, 3 – 29s, and 2 – 30s. Walleye volume was also very good with daily guide sheets averaging 40 walleyes over 18 in. The slower periods during flat calm conditions were balanced out by some fast bites when the wind blew.

Very few guests were interested in spending time casting for pike this week. Despite the limited amount of effort applied to chasing big pike, we caught and released 5 – 37s, 2 – 38s, 1 – 43, and 1 – 44. As we studied the numbers, one of the senior guides tonight made the comment that the southern basins of Lac Seul have a disproportionate number of giant pike. It is the Fall phenomenon. Unlike many of the far north fisheries, we don’t have the normal pyramid population catch rate of 200 – 30s, 50 – 32s, 6 – 36s, 2 – 38s, 1 – 40, and every now and then a 42. In the southern basin of Lac Seul, you are just as likely to catch a 38 as you are to catch a 42 – 44 in the summer and fall. If we didn’t have so many big walleyes to chase, I am certain that our summer big pike numbers would be much stronger.

I am working very hard to coach both guides and guests to keep an even keel and a balanced perspective. We are not catching more walleyes than we have in the past. Good bite days are still great and slow bite days are still a chore, but the percentage of large walleyes has increased dramatically over one year. I have had many anglers ask me if I think this is based on a late ice out, and my firm opinion is that this is a population issue. The big walleyes are Just Bigger! Period!