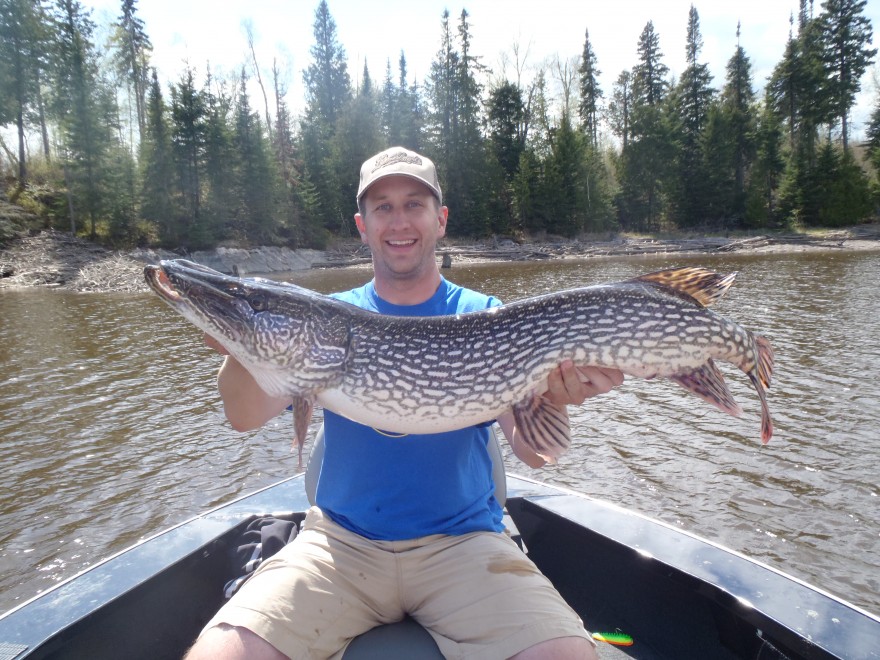 This week’s weather began where the last one ended. Sunshine, stable conditions, and high temps in the 70s sent the fish migration into overdrive. The big pike invaded the warm shallow bays and the walleyes began their post spawn roam. Areas that were vacant one day, held fish the following, and were bumping the next. And then the weather turned on Thursday and the wind blew, inches of rain fell, temperatures dropped, the big pike fled the shallows, and the walleyes slipped down the break and fell into a pseudo sulk.

If I was writing this report on Wednesday it would have been a full on chest thumping brag about how great the fishing had been. But instead, I am writing it on Friday after I have been blown around, rained on, with aching hands, and struggling to find fish close to the lodge because it has been too tough to run up North for the last two days. I am going to try my best to follow my own advice to my guide crew and search for “The Balance.” Overall, It was a Bang up week. We smashed big fish and lots of them, but we ended on a bit of a wimper.

It was a big week for big walleyes but we also racked up some big stats for huge pike. We caught big walleyes on the north shore, but we also found trophies down south near the lodge as well. For the week we caught and released 33 walleyes over 27 in., including 10 – 28s, 4 – 29s, and 1 – 31. Volume improved, but the average guide sheet reported just over 15 walleyes over 18 in. per boat per day. Early in the week, jigs and twister tails or Husky jerks turned some big walleyes shallow. Most of the really big walleyes were caught dragging big minnows on light jigs in areas with relatively warm water. This week, 45 was tough, 53 was OK, but if you could find 58 degrees F surface temps, you were a happy guide.

The hunt for really big pike was a bit different this spring. The usual spots still held volume and a few big ones, but the guides that found most of the Huge pike relied on wind direction, surface temps, and scouting to find unexploited areas for numbers of big fish. Most of the really big pike this week were caught from spots that don’t even earn Grade C- ratings from most of the senior guide staff. With most fish in 2 – 6 ft. of water, shallow presentations were the key. We have relied heavily on Husky Jerks in the past, but Medium to large spoons were clearly the best choice this week. Multiple guide boats returned with the same story – “All the big pike were caught on spoons.”

Smallies are just beginning to show up as incidental catch, but it won’t be long before we are fishing them hard.

As always, weather is the key. If it hadn’t gone bad, then there is a good chance that this would have gone down as THE big fish week of the year. As it was, it was still great and we sent many guests home with master angler pins. We just didn’t hand out many on Thursday or Friday.