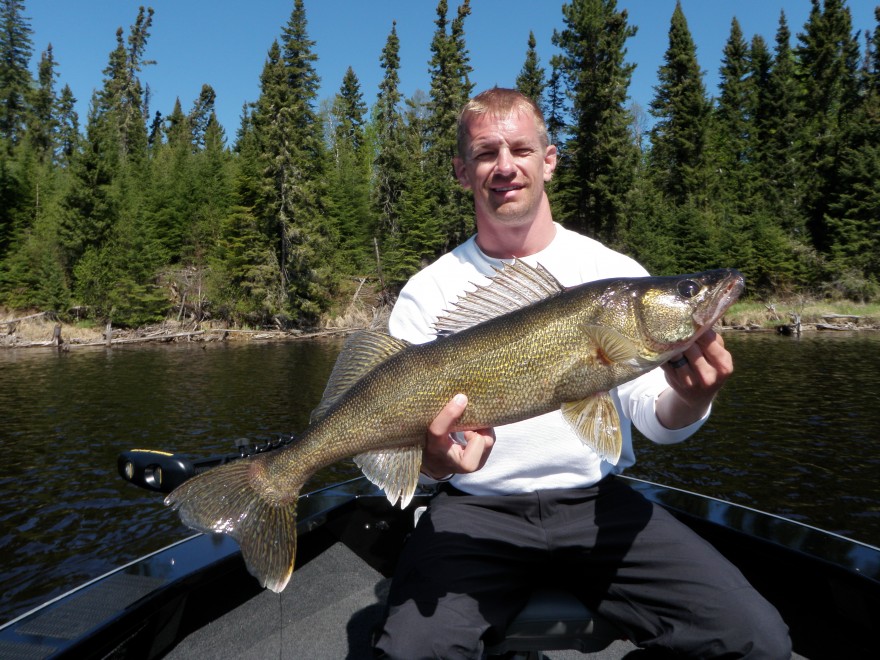 The monsoon ended as the week began. Lake levels rose more than a foot in one week as the inches of rain made their way into Lac Seul. Weather patterns stabilized early and we enjoyed a week of light winds, warm temps, and Brilliant sunshine. Volume improved and we smashed the big fish. I will be surprised if we have another week this year that can beat this past week’s catch for top end numbers. We caught and released 42 walleyes over 27 in., including 13 – 28s, 5 – 29s, and 3 – 30s.

Post spawn walleye migration continued on its normal course as fish steadily moved into the early stages of transition locations. Most of the big walleyes are still back in the warm water bays, but there are enough on the move to warrant checking out some of the “next” spots we fish as Spring progresses.

Most of the big walleyes were caught dragging minnows on light jigs in 8 – 13 ft. of water, but there were a few caught very shallow pitching jigs and plastics into 2 – 6ft. Volume continued an upward trend, with most daily guide sheets reporting 20 – 30 walleyes over 18 in. per boat. The highest daily total reported was 48.

The big pike disappeared early, but returned as lake surface temps warmed into the upper 50s on the main lake and into the 60s in protected areas. There were a few gators caught way back in the skinny water, but most were found on slightly deeper water locations (points, cups…) just outside the spawning bays. For the week we caught 37 pike over 37 in., including 6 – 39s, 1 – 40, 2 – 41s, and 1 – 42. Spoons and In-line spinners were top producers.

Our first attempts at Bass this year resulted in modest returns. There are some bass moving into the shallows, but many of the bigger bass were caught deeper as incidental catch while dragging jigs or pitching for walleyes. For the week we caught 6 over 19 in.

A Good Problem to Have: We try to keep the photo board in the dining room current with all the big fish caught during the week. With 42 walleyes over 27 in. and 37 pike over 37 in., there just wasn’t enough room.