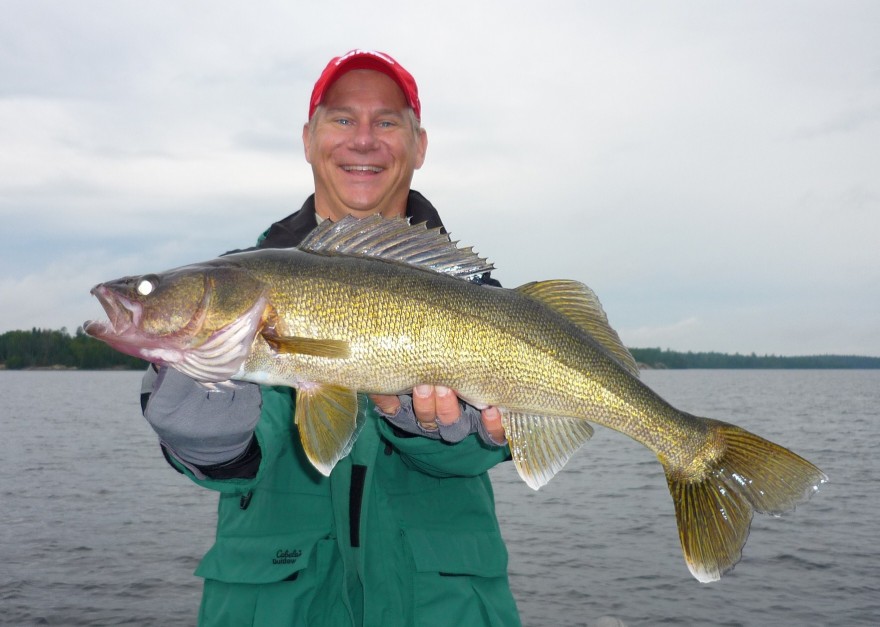 Another beautiful week up here at the Wheel. The weather has been stable for the most part, and I feel like there are only so many of these nice, sunny, end-of-summer days left. There were a few systems that made their way through bringing rain and thunderstorms overnight and in the early morning, which affected the fishing here and there, but overall a very nice week on the lake. Fall continues to creep in though, with the leaves on the trees changing little by little and the nights and mornings becoming nice and cool.

The team has shrunk to its final skeleton state, about 8 of us now (plus a celebrity guide appearance from Graham Coulombe who is in camp for the week). We have equally divided ourselves between the bear hunt, walleye fishing, and pike fishing. The bear hunters have been doing well, and this week there was a new SWWL record bear brought in that tipped the scales at well over 400 lbs. Some guys have been pike fishing in the afternoons when the walleye bite becomes tough. As for me, I am plugging away at the walleye fishing with some of my favourite hardcore guests – Bill J. and Joel.

For the week we had 13 walleye over 27, with 11-27’s, 1-28, and 1 huge 30 inch walleye. Those big fish numbers line-up well when considering the angling effort, about 1/3 of the guided days we have at our peak times. The best walleye bites were still coming off of deep sand and rock, and average depths were anywhere from 20 – 35 ft. Some of our local A spots are still steady and reliable, while others seem to be vacant. Again, another sign that fish are on the move. Hopefully that transition will come easily and we’ll be stacking fish in shallow water and hunting monsters out deep.

The pike fishing has had consistent attention this week, with 2-3 guides working most afternoons on hunting down a big one. Again there is plenty of pike action to be found out there, and consistent mid-30s getting caught by anyone slinging baits, but the big ones are doing a lot of following and not a lot of committing. Reports of monster pike being seen and raised are encouraging, and soon we should see that big pike explosion we are all waiting for. Pike numbers for the week include 3-37s and one monster 42.5.

That’s all for now folks! Hope your week is well and to see you soon!