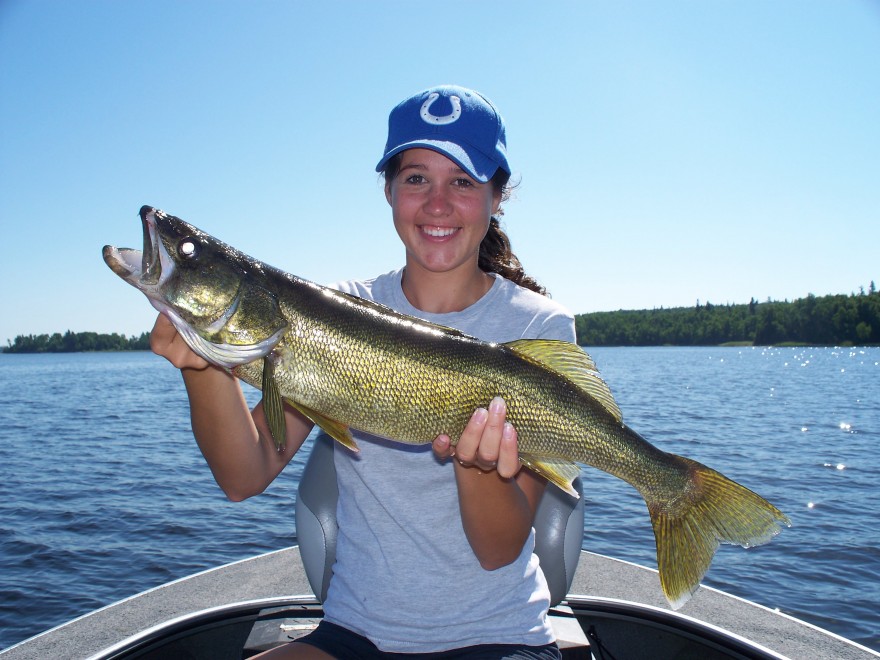 It is Northwest Ontario and we are very accustomed to dramatic weather changes. In fact, we expect them, but this past week has been one that will not soon be forgotten.

By Saturday we were well into a heat wave with over 100 wildfires burning north of the lodge. The first half of the week was dominated by light winds, blazing sunshine, day time highs over 90 degrees and humidity index values over 100. There were days with light north winds that blanketed the area with smoke. I have never seen smoke on the lake so thick that it reduced visibility to less than ¼ of a mile. Guides navigated by GPS. Water bombers flew almost every day. We were on a severe thunder storm watch on Wednesday, and we spent the day ready to go to shore, but every storm that built up went north, south, or just blew itself out. About 30 drops of rain hit the lodge and the front went through that night dry. The weather forecast for Thursday neglected to mention that the wind was going to blow 30 – 40 mph all day. And finally today it felt like September as north winds and a low cloud deck settled in with a few showers. We have shut all of the windows in the lodge and we lit fires in cabins tonight for guests. The low tonight is forecast to be in the high 40s. It really feels like September and yet the fire ban is still in effect. If this paragraph was tough to follow, then think what it did to the walleyes.

Walleye fishing is most challenging when the fish are spread out and the bite is off. We began the week smashing large numbers of walleyes, including big ones, in the shallows. Depths ranged from 4 – 12 ft. and sand flats in front of cabbage weed beds were the key. Saturday through Wednesday, the deep water sand and rock were absolutely empty of forage and walleyes. Everything was either suspended in the top 10 ft. or in the shallows. Everything changed when the weather broke. You could see the baitfish on your graph spread out and mix through the entire water column. Shallow water sand flats that held enough walleyes to keep several boats busy all day emptied and produced fewer than 1 fish per hour. We found some walleyes moving out to deep water sand flats on breaks between 20 – 25 ft. with ¼ oz. jigs and minnows, there were semi-suspended fish caught on wind blown rock sand transitions in 14 – 20 ft. moving quickly (.5 to 1 mph) with big jigs and gulp, and there were still a few walleyes caught on shallow water spots (8 – 12 ft.) as long as the wind was blowing. The shallow fish changed activity levels quickly and would prefer triggering type baits like fast plastics at times, but then later on that day in the same spot, you would have to gear down to light jigs and minnows to scratch a few out. To consistently catch fish this week, you had to shift gears and aggressively hunt dramatically different water with various presentations all day, every day.

Despite the challenging and changing conditions, the guide crew managed to stay on fish and to turn surprisingly good results. For the week, we caught and released 45 walleyes over 27 in., including 9 – 28s. Guide sheets averaged 35 walleyes over 18 in. per boat per day and the highest daily total was 68.

There were a few groups that spent time chasing big pike this week with mixed results. The big pike caught were found primarily on main lake weedbeds closer to deeper water. There were 3 – 41s caught this week and Don Holton caught his personal best at 44 inches.

At a check out last night, a guest asked me what I was going to say in this week’s fishing report and I gave him a brief description of what is written above.

Guest response: “Wow, we didn’t think it was that tough… our guides just kept moving until we found the next bunch of fish…. It was great.”