The following is an email I received last year. 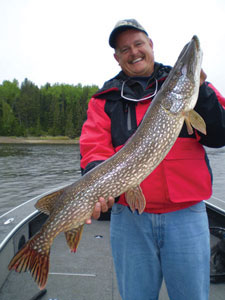 Mike, All of you guys claim to have big fish! Why should I believe You?

I am keenly aware of the bias expected from a lodge owner and that is why I rely heavily on our annual guiding statistics to provide an accurate description of the Fishery. All of the guides are required to keep a log of walleyes over 18″ and pike over 30″ caught and released each day. At the end of the season, I compile all of the stats and publish them in my brochure and on my website. A quick glance at the 2001 walleye stats reports that 470 anglers caught and released 99 walleyes over 29 in., 590 walleyes over 27 in., and 3037 over 24 in.

To describe Big Lac Seul walleyes in terms of length is a discredit to many, because some aren’t just long, many are huge! I had caught and guided for a few big walleyes prior to fishing Lac Seul, but I was not prepared for the numbers or for the physical condition or the unbelievable proportions attainable. I had never before seen walleyes with thick meaty shoulders, bulbous guts, or that were thick through the tail. An average 27 inch walleye on the shield weighs 7 pounds. I weighed a portly 27 inch ‘eye in my boat last May that tipped the scales at 8 lb. 13 oz.

I am a confessed big fish junkie and that is a big part of the thrill of chasing Lac Seul walleyes, but it also has a lot to do with the water itself. The lake is huge. Lac Seul has over 3,000 miles of shoreline and covers 560 square miles (358,400 acres). In 5 years of guiding, I have seen less than 1/3 of it, have fished less than 10%, and consider myself familiar with less than 5%. In a lifetime, you could not run out of new places to fish. Along with the immense amount of fishable water is an incredible diversity of habitat. Deep clear main lake basins, mazes of islands, immense shallow fertile bays, sunken islands, reefs, miles of weedbeds, clay banks, clear streams, and huge sand flats can all be found within just a 10 mile radius. The options for prey are just as diverse. Walleyes can choose from yellow perch, ciscoe, smelt, aquatic insects (including mayfly larvae), a half dozen species of large minnows, and literally dozens of others depending upon the local and seasonal abundance. Combine this diversity of forage and habitat with the fact that many walleye populations choose to take advantage of many different types of opportunities all at the same time and you realize Why the Lac Seul puzzle is so incredibly complex.

I strongly believe that the size and complexity of Lac Seul are responsible for its incredible Trophy walleye fishery through the process of two mechanisms. First, the size of the lake produces an incredible diversity of habitat and forage, allowing walleyes access to readily available nutrition, regardless of seasonal or annual fluctuations in the populations of different food sources. No matter what the time of year, or if a year class of perch, or ciscoe fails, there is always something else to eat. The second, is that the immense size of the lake provides so much fishable water, that if just a fraction of the walleye populations does something a “little different”, they can go for years without crossing paths with a hook and that dramatically improves their chances of reaching trophy size.

Taking into account the enormous size of the lake and its complexity, the question of where to start can be overwhelming. Good guiding strategy is still grounded in the fundamentals that most seasoned walleye anglers are familiar. Walleye location in Spring begins with a focus on spawning areas with a progression to shallow warm water bays isolated from the main lake. At the beginning of Summer, efforts shift to mid depth regions keying on wind blown secondary points, newly emergent weed beds, and classic walleye structure. Once into Summer, we tend to follow the fish out to the deeper water structures associated with the main lake basin. Standard strategies will get you off to a good start, but to really capitalize, we have learned that you have to push the envelope.