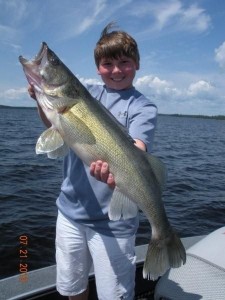 It was another weather roller coaster week on the south shore of Lac Seul. We started out with overcast, flat, calm conditions and then thoroughly mixed the lake up with a massive storm that dumped over 3 inches of rain and exited with strong Northwest winds. The morning before the storm was the fastest bite of the week and the day after was the toughest. Overall, volume was less than normal, but we still continued to have great numbers for big fish.

There was no way to consistently catch walleyes this week without religiously checking all of the major spot categories. We had short lived bites on both deep water rock and sand. There was good shallow water walleye action just before the storm and 2 days after. Some were in front of the weeds and some were on sand flats. Until we get some consistently stable weather, I am going to continue to bounce back and forth between very different types of spots all day long. Today we caught walleyes in 5, 15, 25, and 35 ft. of water.

With the fish so spread out, we did see a noticeable drop in volume. Guide sheets averaged only 20 fish per day over 18 in. The highest daily total was 56. Surprisingly, it was the slots and mediums that were missing, as we still caught good numbers of big walleyes. For the week we had 33 walleyes over 27 in., including 7 – 28s and 1 – 29. The big fish also came from all types of depths and areas; deep rock, mid lake sand shelves, and shallow water weeds.

Standard jigs and minnows caught most of the walleyes, but there was a small window before the storm where rip jigging turned some fish on the shallow sand flats. A few boats tried a little pike fishing in the afternoons. They caught 5 over 37 in., including 1 – 38, 1 – 39, and 2 – 40s.

A guest at checkout, “this was our seventh year in a row fishing this week… and it was weird, we caught fewer fish than we usually do, but we also caught more big fish than we ever have!”