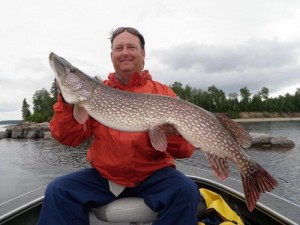 Lack of wind was the big weather story this week. At the very most we had a breeze and it tended to switch at least a couple of times a day. We also had the peak of our mayfly hatch this week as well. The combination of flat water and a hatch made for some challenging walleye bites. The guides shifted gears and changed patterns and locations to find the fish, but there were some slower afternoons than we expect for this time of year. The bass bite is winding down quickly, but big pike made another strong showing this week.

Walleyes continue to be scattered. We caught them in 2 feet, in 32 feet, and all depths in between. We also found fish on deep water summer sand breaks, back in shallow water spring spots, and in transition areas. Successful guiding strategy this week was to bounce back and forth between different areas and depths until a pattern emerged. Sometimes it did and sometimes it didn’t.

With all of the movement, walleye volume was a little off this week with guide sheets averaging 25 over 18 in. per boat per day. The highest daily count was 49. Despite the drop in volume, big fish numbers remained strong with 28 over 27 in., including 5 – 28s, and 1 – 29.

Surprisingly, we never established a solid shallow pitch bite for plastics that we often see with prolonged, stable calm weather and sunshine. We found the occasional fish, but never enough action to hold a boat for more than ½ an hour. Instead we found neutral fish in 10 – 14 ft. of water or lazy negative fish on sand in 16 – 25 ft. There were some random nice walleyes caught shallow by pike fisherman, but most were caught on light jigs with minnows fished a little slower than normal.

There was a significant amount of time spent bass fishing this week and that bite is definitely reaching its seasonal end. We still found bass shallow, but the numbers were lower and the size was smaller. For the week, we had 82 over 17 in., including 24 – 18s, and 1 – 19. It was still very good bass fishing, but compared to this week last year, it is clear that the early spring resulted in a quicker conclusion to the bass season. Tubes were the top presentation.

There was limited effort spent chasing pike. The action was variable, but the guides continue to boat some really big fish. For the week, we had 7 over 37 in., including 2 – 38s, a 43.5 and a 44.25. Big spoons and big plugs were top producers.

A guest – “Can the weather be too nice for great walleye fishing?”