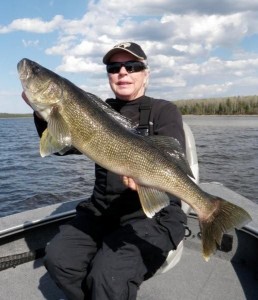 After two very cold openers in 2008 and 2009, we pushed the lodge opener back to May 20. Camp filled up today and this season couldn’t be more different than last year. Ice out was April 19 and it has been unseasonably warm. This is the earliest ice out that I have ever heard of for the south basin of Lac Seul. Main lake temps are all above 50 and many areas are already consistently in the 60s. As expected, the spawn and spring migrations are well ahead of schedule.

We are currently fishing areas that we would normally be checking in early to Mid June. Some spring spots are still holding fish, but many areas that our return guests are expecting fish have already been abandoned.

We had one group in early to fish walleye opener and my parents were up as we finished up advanced guide training leading up to season. With just a few boats on the water, we still managed to put quite a few really nice fish on the board. Volume and Size for walleyes has been excellent. Boats averaged 30 walleyes over 18” on the guide sheet per day and the highest daily total was 54. For the week we had 8 over 27”, including 2 – 28s, and 2 – 29s.

The Kicker – After shorelunch on a beach with guide Mike Battistoni:

Mike B. – “This afternoon I’m thinking about fishing little Iowa and Turtle Flats.”