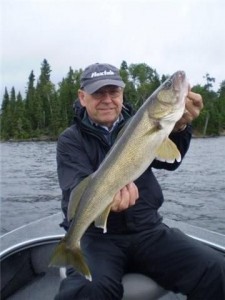 The Beginning of the End

Fall is here and right on schedule. There is steam on the lake this morning as air temps are right at 45 degrees. It was a week of wind, rain, and fronts. We had well over 2 inches of rain this past week spread over most days. The lake level has risen rapidly and is now at the high point for the season. I have guided my last fishing group for the year and like a few of my guides, will be packing up and getting ready to head south this weekend. It is hard to believe that the “summer that wasn’t” is almost over.

The challenging weather conditions put a damper on the walleye bite this past week. The numbers of fish were good, but the bigger ones were more difficult to trigger. Guide reports averaged about 40 walleyes over 18 in. per day and the highest daily total was 63. For the week we had 14 walleyes over 27 in., including 1-28.

We had groups hunting big walleyes, but heavy rains, high winds, or their after affects left us with a “post-front bite.” We could still catch slot to medium sized walleyes along with tons of little ones on the main lake sand benches, but the big fish that are usually mixed in with them were few and far between. Main lake rock structures are still virtually empty. The variable weather effectively shut down the shallow water bite. Almost all the action was between 18 – 30ft. Jigs in sizes ¼ – 3/8 oz. tipped with minnows were the presentation of choice.

The weedbeds are just beginning to break up and main lake temps are already (or still) at 63 degrees. It won’t be long before we see big pike move up into the shallows. We had just a small effort for pike this week with limited results. There were a few random bass including a 20 caught while walleye fishing.

Missy and the crew will be here until Sept. 12, but this will be the last fishing report of 2009. It is time to head to Iowa and get ready to chase whitetails.

Many different guests: “Were you able to fill all of the cancellations you had in Spring?”

“We patched in the season pretty well, but I did exhaust my entire waiting list and will probably attend at least one sport show in 2010…

After Jan. 15, I expect the book to be packed and to be working on waiting lists again.”