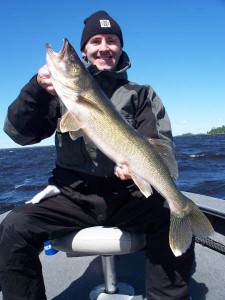 I concluded last week with something like the new normal isn’t normal. Well it was that all over again. If someone put a hood over my head, spun me around and set me on the lake this week, I would have told you that we were fishing in Mid May or Late Sept. After fishing for a few hours, I would have concluded late Sept., because most, but not all walleyes were deep.

This was not only a tough week because of another massive and cold rain system that settled in and never left, but it once again scrambled the fish. I had guests requesting boots, gloves, and heavy socks to be picked up in town. Seriously, this storm started on Sat. with high winds and is just about to leave us tonight. We are talking about sustained north winds over 20mph and air temps hovering between 45 – 60 with rain off and on the entire time. During my check outs tonight, I apologized for the terrible weather and my guests were gracious enough to accept that this was an off the charts week.

To be very clear and very plain… “I have never, ever!!!, seen surface temps of 58 degrees on the main lake going into the 3rd week of July. In 2004 we had a cold spring with water temps almost reaching 60, but it was the first day of July, not July 17. Wood stoves and propane heaters were full on this week. Guests were wet and cold. Shore lunches were in camp and the lodge was very quiet.

Fish are still scattered. Walleyes are mostly deep, but there are many shallow. All were very reluctant to bite this week. Despite the deplorable fishing conditions, we still managed to post 12 walleyes over 27in., including 1 – 28 and 2- 29s. The average daily guide sheet reported 25 walleyes over 18 in. and the highest daily total was 60.

We were confined to the south shore for most of this week and most guides moved quickly and spot checked areas to find fish and then geared down with light jigs and minnows fishing slowly to coerce reluctant bites.

There was a small effort for pike that resulted in a pair of 38s, but that bite was just as tough as the walleyes. We are done chasing bass for the year and that is too bad. There were actually some walleyes caught while casting for pike this week.

The Kicker: Guest; “I would like to switch my 1st week of June dates to July. The weather this week was awful!”

MW…”I will be happy to switch your dates, but can’t help but to inform you that this is Northwest Ontario and it does not discriminate by month when to provide the worst weather of the year… And that is why I don’t play favorites…Whatever you request for dates is what I try to provide, because your guess is just as good as mine as to when the weather will be perfect to get the bite rolling.”