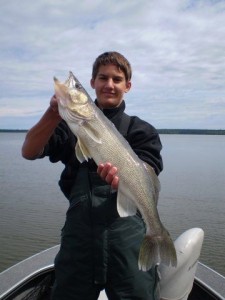 A Blow out, highest water levels I have seen, and a slow recovery for the Walleye bite;

A huge weather system at the beginning of this week included torrential rain, lightning, and prolonged periods of high winds. Fishing was impossible in many areas and after the storm; the bite was very difficult for several days. It was another week with over 3 inches of rain and the lake level just keeps going up. The end section of one fixed dock is just going under water and the end of the primary fixed dock is level. Lake of the Woods Water Control board has the outflow set to the highest capacity since 1992. The English River down stream from Lac Seul is expected to rise 12 – 24 inches this week as they are trying to release water as fast as possible. There are “floaters” everywhere and they are tough to see on overcast days with a light breeze.

Volume for walleyes plummeted during the storm and was slow to recover. Main lake, big sand structures were still the primary focus for walleyes in depths between 20 and 32 ft. There were some walleyes caught on rock deep, but basically none in front of the weeds. Daily guide sheets averaged only 20 walleyes over 18 in. per boat. The highest daily total was 98. For the week, we caught and released 17 walleyes over 27in., including 3 -28s. By SWWL standards, it was a tough week during a time period that is usually consistently productive.

The smallmouth bite skidded this week as expected. There were a few fish in the regular spots, but the season is basically over for us. For the week we had 6 bass over 17 in and 1 – 18. There was a little bit of effort spent on Pike, but it was a bust.

I have talked and written recently about “extreme seasons” and this year is definitely a continuation. We are still finding and catching walleye volume and size that would be considered outstanding elsewhere, but more and more often, we are working through the extremes to get it done. Last Spring was early and hot and the water was super low (down 8-9 ft. from current conditions). With the quick Spring, volume was heavy in the shallows, but we were surprised to catch big walleyes out of 30 ft of water in May. Last year at this time, it was unbelievably hot and flat calm for 1-2 weeks in a row. We found good walleye volume in relatively shallow water (10-14 ft.) in front of the weed beds, but the deep water bite for big walleyes completely shut down on both sand and rock. This week, we are still working through a very cool spring and summer (we have yet to hit 90) and the water is at record levels. The walleyes bypassed the weed bite altogether and have set up shop on deep water – main lake sand structure.

In my first years of guiding, I felt compelled to offer a rational explanation for everything that happened on the water. In more recent years, I have become more comfortable with the truth. Sometimes we can accurately predict the bite, at other times we can’t, and I don’t know why. It isn’t for lack of trying, it is because it is extremely complicated and in recent years, the bites have become extremely variable. The only solution to the variability is to stay positive, open minded, and continually change pace and shift gears.