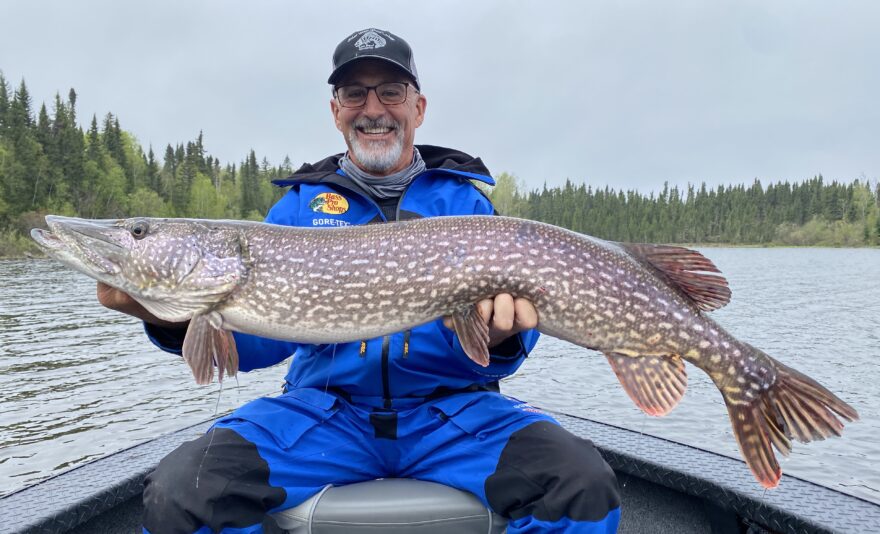 It was a cool and rainy week in Northwest Ontario and water levels are still going up everywhere.  Lac Seul is not at a flood stage like many of our neighboring bodies of water, but the lake is at the highest level that I have seen since 2014.  In the 23 years that I have owned the lodge, we have never seen water levels this high in spring.

The high-water levels have changed some of the spring spawning areas for pike.  The newly submerged vegetation and cool conditions were likely the reason that many of the big pike remained in or near the shallows this week.  There were not that many anglers chasing big pike, but those that did, absolutely smashed them.  Both numbers and size were big with most caught on large spoons and cranks.  The 6 in. Jake was a favorite.

For the week, we caught and released 35 pike over 37 in., including 6 – 40s, 4 – 41s, 1 – 42, and 2 – 43s.  Volume was also extremely high.  The past 2 weeks will likely be some of the strongest big pike results that we have seen for some time.  Mike and Nick Cochran fished hard for the big gators through some tough weather conditions and were responsible for catching more than half of the fish on the photo board.  I joked about needing to charge them a photo paper surcharge.  What is most surprising about those big pike results is how few anglers were chasing them.  It was an exceptional week of pike fishing.

The weather and water conditions were a little trickier for the walleyes.  The sun is powerful in the north this time of year and it only takes a few days of sunshine to heat the surface.  Areas that are protected from the main lake often warm more than 5 degrees in one day.  Usually, the warm water draws baitfish and the walleyes are right behind them.  As a benchmark, we like to see 50 degrees, 55 is better, and at 60, the bite can be on fire.  With almost a full week of cool showers, the main lake remains in the high 40s and many areas that are normally in the 50s are stuck in the high 40s as well.  When the surface temps are similar across the lake and from top to bottom, there is no motivation for groups of walleyes to concentrate in the shallows.  We caught walleyes from 4 – 24 ft. this week.  There were some caught on the main lake, some in the back water bays, and some in transition areas.  The guides worked hard to find good bites.

It was primarily a jig and minnow bite with most boats using 1/8ths and 1/4s.  There were a few fish caught on plastic, but most of those were earlier in the week before the real cool weather set in.  Volume was down a bit from last week.  Guide sheets averaged 20 – 25 walleyes over 18 in. per boat per day.  For the week, we caught and released 25 walleyes over 27 in., including 4 – 28s, and 2 – 30s.

The Take Away – Given the same water and weather conditions, our results 15 years ago would have been much more modest.  The accumulated knowledge of 20 years of exceptional guiding, helped our current crew make the most out of a tough bite.  The foundation of our guiding program is shared knowledge and that is the only reason we were able to turn good results out of a tough bite.