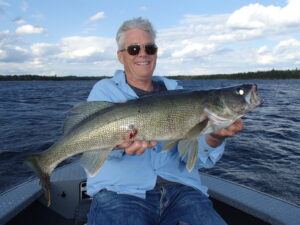 We are officially back open to US anglers. It took some time and there were some challenges along the way, but the road to normal is back in sight. We have a new cook and guest services team, guides are here or are on their way, and tonight there will be 7 boats tied up in the bay.

The first anglers to return to the Wheel were members of the Bill Roach group. They had to work at it but they were back to catching walleyes on Lac Seul and they just about had the lake to themselves. There were the normal new challenges of navigating the pretravel PCR test, documenting their vaccination status, and downloading the ArriveCan app. Then there were the unexpected travel surprises, like a deer collision, switching vehicles, and an unusually long first day wait to cross the border at International Falls. It appears that the long border wait was just an opening day issue.

I am sure that there will be other surprises along the way but the most significant news is that the border is officially back open and in use. We do have a fairly full reservation book for the remainder of the summer and fall. There were a few groups that had issues or concerns about the recent border opening that chose not to come up. For those still interested in fishing in 2021, I would encourage you to contact us at the lodge and let us see if we can find you a spot.

After a very warm winter with little snow we have also had an extremely dry July. The fire danger has gone down dramatically with recent rains but the lake level is as low as I have seen it this time of year; Lac Seul is down 4 ft. from the typical high water mark.

The walleye fishing has been good. Traditional summer patterns on both main lake rock and sand have been very productive. Key depths have ranged between 20 – 30ft. Aggressive tactics with big Gulp have been shown results as good as smaller jigs and minnows. It may be due to lack of fishing pressure but it feels like the catch rate has been faster than what we normally expect for this time of year. Both guide boats on the water today reported 50 – 60 walleyes over 18 in. per boat. Bill’s group topped out with several 25s and 1 – 27 for their first day back on the water.

We have not spent much time chasing pike or smallmouth bass. I anticipate having more to add to the pike fishing story as the lodge fills up and the surface temps begin to cool as the summer winds down.

For groups that are planning to come up, we have a good idea of what is needed to cross the border. If you have any questions, please contact us.

The Take Away: Take nothing for granted. It is harder to get to Canada than it was 3 years ago, but it is worth it. For those of you that have been here, you know what I am talking about. For those that have not, we hope you get the chance.