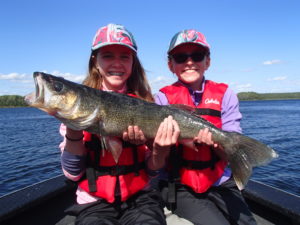 This week it was hard to convince ourselves it was still only August.  The weather continued very fall-like, nights were cool and some days were too, and there were lots of cloudy skies and blustery days.  The walleye acted like it was fall as well, moving from shallow to deep and back again and just being much less predictable.

From talking with the guide crew two trends stand out this week and they were widely different.  We finally started to catch numbers and size out of “deep summer” depths.  We’ve been dipping out to 30-35 feet regularly all summer, but this is the first week of the season where catching both size and numbers out 30+ feet was the rule rather than the exception.   At the same time some boats found good fish by going the other way and targeting typical fall patterns in less than 20 feet.  Overall, the best volume and most of our big walleye came from following the bite out to deep water, but a couple of the biggest ‘eyes of the week were caught following the shallow fall trend.

This week our best volume came from gearing down – Lighter jigs and finesse presentations were the answer.  Whenever we’re working a finesse bite kind of day, we’ll put on big jigs and turn up the speed to check on the reaction bite that Mike has been talking about in his last few reports.  We kept checking, but the walleye liked the subtler approach this week.  Though of course there is always an exception – the biggest walleye of the week was caught pulling Gulp in deep water.  Walleye volume varied a lot from day to day.  Most days it was not uncommon for a boat to check a half a dozen spots before finding a location that produced any numbers of fish for the sheet.  Guide sheets averaged 30 walleye over 18 inches a day and for the week we caught and released 33 walleyes over 27 inches, including 6 ­– 28’s, 1 – 29, and 1 – 30.