We felt the first little hint of a change in seasons this week; mornings were cool (below 50), when you study the shoreline you can pick out the first hint of yellow leaves, and some of the shallowest weedbeds are beginning to die out. It was still summer fishing with both main lake rock and sand producing consistently, but we know that more changes will be coming soon. 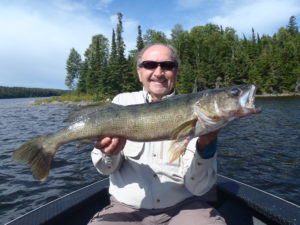 Walleye fishing volume varied on a daily basis. There were a few really hot bites, a few slower ones, and most days were just consistent. It was more common to catch 5 sheet fish from 5 different spots rather than smash 25 off of one. Guide sheets averaged 35 walleyes over 18 in. per boat each day. For the week, we caught and released 35 walleyes over 27 in., including 6 – 28s, 2 – 29s, and 1 – 30. It was once again an even split between our two most productive summer presentations. Live minnows on 1/8 – ¼ oz jigs fished vertically worked well to entice reluctant biters, but we were also still able to trigger reaction bites pulling 6.5 in. Gulp Nemesis on ¾ oz. jigs at speed (.9 – 1.2 mph). I have had a few groups that have had a hard time finding the Gulp product in stores. I recommend going to Berkley’s website and make sure to look for the Saltwater version. On Lac Seul, it is hard to beat white. Key depths for the week were 20 – 30 ft.

The Take Away: It feels like summer is faster now. I had a meeting today finalizing plans for the construction of the next new cabin. Construction begins the first week of September and the hardest part of that job is coming up with a name for the new 10-man cabin. Missy and the kids are already back in Iowa for the start of school, soccer, and volleyball. It is hard to believe that this is my last report of the summer season. I will finish guiding this week, spend a few days chasing muskies, and then it will be time to head back to Iowa to get ready for the Fall guiding season. Overall it was another great season on Lac Seul. Brett will take over and run the operation for Fall and will be writing the next weekly fishing report.