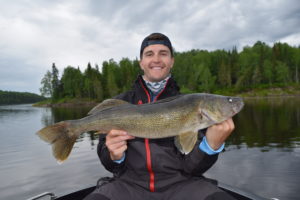 The changes are happening fast on Lac Seul this week.  Above the surface, we had lots of stable warm flat days with a little rain.  Below the surface, it was a scramble.  The bass finished their spawn and moved on.  Mayflies hatched and disappeared.  The weeds are almost topped out and some pike almost moved in.  And the walleyes are spread out through the water column and the spectrum of their annual spring transition.  That means that you can catch A mature walleye on deep summer sand structure, A walleye on a transition spot next to one suspended, and A walleye holding on to the last bit of early season spring spots.  The hard part was finding a concentration of fish.  The guide crew didn’t find many, but when they did, they ground them out to get as much production as they could.

Overall Walleye volume for the week was really good with guide sheets averaging 40 walleyes over 18 in. per day.  The only surprise is that it was hard to find the big 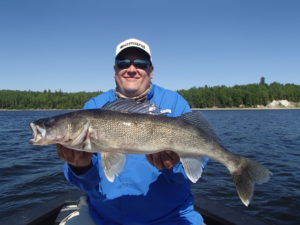 mixed in with the volume.  Usually, if you find a bite that gets you half way down the back of the page (about 40 fish over 18), then you are going to just trip into some of those 26 – 29 in. fish.  There were guide sheets this week reporting 60 walleyes over 18, but topping out with just one or two over 25 in.

There were some big walleyes caught this week, but they were a bit more scattered and more difficult to predict than normal.  For the week, we caught and released 44 over 27 in., including 10 – 28s, and 4 – 29s.  Many of the big ones were caught with big jigs and 6 in. Berkley Nemesis.  You don’t catch as many fish with the big plastics, but it feels like those baits select for bigger fish.  There was no key depth for big fish this week and that was the issue.  Big eyes were caught in 30 ft. on jigs and minnows and in 3 ft. on pike plugs.  They were everywhere.

The cabbage weeds are just starting to top out and that is usually a key window for big pike on Lac Seul.  There were a few groups targeting pike and their results were OK.  For the week, we caught and released 7 over 37 in. with 3 – 40s.

The smallmouth bass bite feels like it happened a month ago.  There were still a few nice fish caught, but most have moved into their transition out into the main lake.  Totals for the week – 48 over 18, with 10 – 19s, and 1 – 20.

The Take Away – This time of year marks the fastest change of pace.  The weather drives our system.  When it is consistent and the wind blows, it is easy.  When it doesn’t, it is not.  Tonight, we are hoping that a wind change blows the super heavy smoke out of our area.