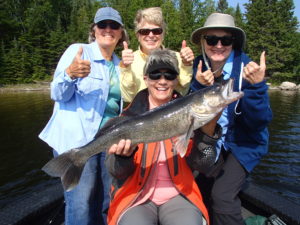 It is still an unusual summer, but we are getting closer to normal this week.  The weather was a typical summer mix of warm and humid days and a few showers or an afternoon thunderstorm.  The walleyes moved onto the main lake sand and sometimes they bit well and sometimes they were a little more difficult.  Walleye volume was excellent and we caught quite a few big ones although not quite as many as you would expect considering how high the volume was.

Guide sheets averaged 40 walleyes over 18 in. per boat per day.  For the week we caught and released 44 walleyes over 27 in., including 12 – 28s, and 2 – 29s.  Production was once again split evenly between big jigs and Gulp Nemesis and smaller jigs and minnows.  Key depths changed every day but 18 – 24 was a good range to begin your search each day.

The Take Away:  I have struggled to explain exactly what is different about this summer and why it feels like the walleyes are off their normal schedule.  Yes, it was a cool spring, but surface temps have been above 70 for weeks.  What I can tell you is that today, multiple guides in several different areas of the main lake basin reported the remains of a massive mayfly hatch.  Even though I down play the effect of a hatch on our walleye production, it is still significant to note that in the previous 30 seasons of guiding in Northwest Ontario, I have never seen a big mayfly hatch this late in the year.