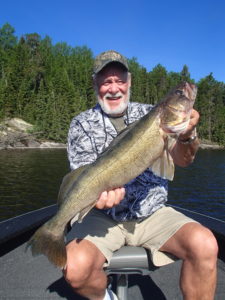 It feels like summer.  We had one big front with a giant rain event on Wednesday and some more storms and showers after that.  The water is beginning to rise a bit, but it is still lower than normal for this time of year.  The only thing that didn’t feel like summer was the lack of concentration of walleyes anywhere.  Especially vacant was main lake sand.  We start to live on the edges of the big sand flats this time of year, but for whatever reason, they are NOT producing walleyes.  Main lake rock was good, but the hard part was a lack of a consistent depth.  On a Tuesday, you could find them in 20, Wednesday in 26, and Thursday in 14 ft.  Sometimes they moved in the same day.

It was a challenging week for the guide crew.  I listened to round table reports where guides listed 8- 10 spots in a row that produced 1 or 2 fish each.  I heard a report that was highlighted with 20 sheet fish in front of the weeds in 8 ft. smashing big Gulp, followed up by a report of dead sticking neutral to negative fish in 35 ft. with 2 sheet fish including a big one dead sticking 1/8ths and minnows.  There were just a few patterns to be found each day and you had to shift through a dozen combinations of areas, depths, and speed to hopefully find one.  At the same time, it is still Lac Seul and a tough day here still stomps a good day in most of the rest of North America.

Volume dropped off a bit this week with guide sheets averaging 25 – 30 walleyes over 18 in. per boat per day.  For the week, we caught and released 26 Walleye over 27 inches with 4 over 29 inches.  Production was still split about 50/50 between live minnows and Gulp Nemesis.  The 6.5 in Nemesis surprisingly turned some big fish with flat calm conditions that felt like they should be for dead sticking only.  You can guess, but you don’t know.  You have to do the experiments to solve for that day’s conditions. 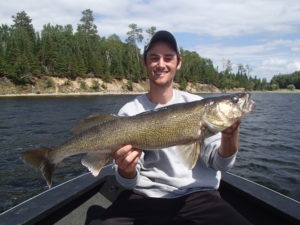 There were some groups targeting big pike and they did OK.  It was a good day followed by a slow day, but if you got the right fish to bite and you didn’t screw up, you could put a big one in the basket.  For the week we caught and released 8 Pike over 37 inches with one 39 incher, and a giant 42.5 inch fish.

Targeted Bass fishing is finished for 2019.

The Take Away – I spent some time at check out talking with Julie and Steve Blake from Iowa.  They talked for 20 minutes about how much they enjoyed just catching big 21 – 24 in. walleyes.  I shared our conversation with the guide crew at round table to make the point that we all want to guide “photo” fish, but we make a huge mistake as guides when we forget that a 21 – 24 in. walleye is a hard fighting, fun big one, and catching 12 of them is just as good or better than guiding for one 27 for most groups.