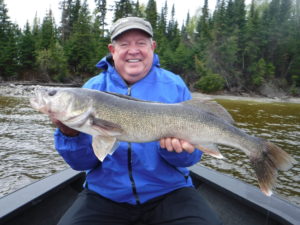 This week’s weather was a slow and steady progression towards what feels like a more normal spring.  I still feel like there is a residual effect from the cold start, but we are beginning to see more consistent volume and the first signs of population movements towards traditional transition areas.

Walleye fishing results were good with guide sheets averaging 25 – 30 over 18 in. per boat each day.  The big fish bite also continues to improve with 32 over 27 in., including 4 – 29s, a 31.25, and another 32.  Most walleyes were caught in warm, back water areas where surface temps ranged between 55 -60.  By the end of the week, we did catch some fish on transition spots as they began to make their way to the main lake.  Jigs (1/8 oz.) and minnows were by far the most productive pattern.

The pike are fully in transition mode and it was difficult to establish any kind of pattern to replicate.  For every 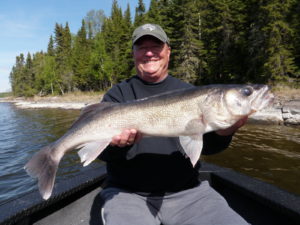 decent fish raised or caught in the back water, there was another one encountered already on the main lake.  Even though there wasn’t a great deal of time spent chasing Northerns’ this week, we only caught 6 over 37 in., including 2 – 39s and 1 – 41.

About ½ the Bass catch was incidental while fishing for walleyes.  There were still quite a few targeted this past week.  Cranks and spinnerbaits were the key to cover water quickly in search of feeding bass.  For the week, we caught and released 36 over 18 in., including 11 – 19s, and 2 – 20s.

The Take Away:  It is difficult to identify a trend as it is happening in real time.  Even though the sample size is small, I never would have guessed that we would start the 2019 season with 3 – 32 in. walleyes.