This past week’s weather was pretty normal for the second week of June.  There were a few warm, nice days, a rainy day, some showers, and a few cold fronts.  Lake surface temps went up above the 60s even on the main lake in places and then crashed back down into the 50s again after a cold North wind.  Production for walleyes was split just about in half between warm back water areas and main lake spring transition spots.

Gulp and plastics were responsible for about 1/3 of the catch and minnows and light jigs made up for the rest.  There were a few walleyes caught on the 6 in. Nemesis and some of them were big, but most of the bite came on 3 and 4 in. plastics pulled at speed (1 mph) with ¼ oz. jigs.  Dragging minnows with long lines on 1/8ths is still hard to beat for results when the walleyes are spread out on the warm shallow flats. 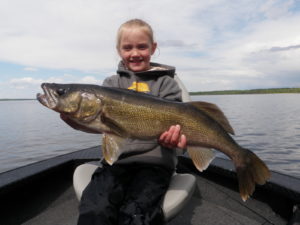 The pike fishing was another story.  There was nothing to concentrate them; no spawn, no weeds, and uniform temps throughout the water column.  There were a few groups that spent time chasing them and the results were modest.  For the week we caught and released 2 – 38s, 2 – 39s, and 2 – 40s.

The story was much the same for the bass.  There were some fish that had moved shallow, but after every little cold front, they went right back down.  We caught a few targeted, but just as many while walleye fishing.  For the week, we caught 13 – 18s and 5 – 19s.

Spring in the North is always variable.  The walleyes responded more predictably to the weather changes than the bass and pike and then we focused hard on the walleyes.