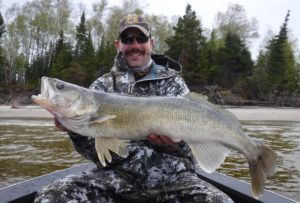 Not just one, but two of them this past week.   Steve Lang caught and released a 32 in. walleye and Rocky Darnell came within a ¼ in. of breaking the lodge record with a 32.25 in. monster walleye.   It was super exciting to see 2 of the biggest walleyes that we have seen in the past 18 years both caught on the same week.

Even though there were some giant fish caught and the sun did shine for quite a bit of the week, we continue to see some of the affects of a cold spring. You could still find patches of snow and ice on a few of the shorelines and beaches. The main lake remains just barely above 50 and some of the back bays are approaching 60, but not many.

The walleyes are on the move, but not even close to the frantic pace that they bit last year at this same time. I made the mistake of not “managing my group’s expectations.” We were actually doing pretty well, but they were comparing our results to last year’s. The bite is improving, but no one ever says that they want to go back to a lodge and catch half as many fish that are almost as big. It is human nature to always want more. 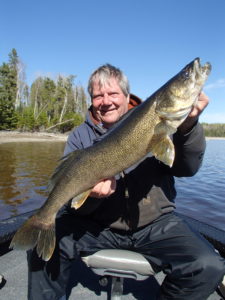 Most walleyes were caught with 1/8 oz. jigs and minnows. There was the occasional shallow water Husky Jerk bite. And there were a few nice fish caught on 4 in. Gulp Nemesis long lined on 1/8 ths. The majority of fish were found between 7 – 14 ft. of water. Warm water was the key. If you found water close to the mid 50s, then the fish were usually a bit more active.

The cool weather also kept the big pike bite in check. There were a few big ones caught, but it was a slow week for pike action. We caught and released 12 over 37 in., including 2 – 39s, 2 – 40s, and 2 – 42s. Standard pike gear was effective (pig plugs, spoons, etc…), but most of the nice fish were caught one level deeper than would have been expected for this time of year.

The bass are everywhere. There were a few targeted, but most were caught while fishing for walleyes or pike. For the week we had 34 over 18 in., including 2 – 19s and 1 – 20. The guests that targeted bass this week used presentations that cover water; cranks, spinnerbaits, and jigs and grubs. Even the back water bays are not yet approaching 60 and until the water gets warm, there won’t be many guides intentionally chasing bass.

The Take Away: After talking with many of my guests that live in Iowa, Illinois, and Nebraska, the point has been made that tough weather is also relative. For those areas that have seen inches upon inches of rain, flooding, and farmers that still can’t get their crops in, our little cool spring spell that slows down our volume by a factor seems fairly insignificant.

We are catching fish and it gets a little better every week, but this is a cool start to the season on Lac Seul. At the same time, it is Lac Seul and we caught and released 2 – 32 in. walleyes this week. Those fish are a marker for the relative strength of an exclusive trophy walleye fishery.