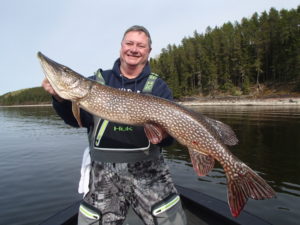 The official ice out on Lac Seul, was May 16 for 2019.  Even though that was only 1 day later than 2018, the consecutive springs could not have been more different.  The 2018 season opener was a Hot one with winter turning to summer over the course of 2 days.  This spring was a slow, cold creeper.  There was only one day above average since the day that I arrived at the lodge on April 26.  Fortunately, the ice was not extremely thick or strong and most of it melted in place.  To make the point of how different the years are, there are still dozens of shorelines that still have ice piled on them on the main lake.  On top of that It was a cold and cloudy, rainy, dreary week of weather.

Walleye opener was May 18 and lake levels are just a bit above normal for this time of year.  With decreased water temps, there are many areas where we are contacting walleyes that are in the middle of the spawn on main lake rock reefs.  Some populations of river run walleyes have finished and we are seeing these travelers already begin to show up in the warmer water bays.  As expected, the numbers are not as strong as last season’s blazing start.  We caught some big ones but the volume was half of what we experienced in 2018.

The main lake remains in the low to mid 40s, but without a great deal of warm sunshine, the shallow isolated bays are warming much more slowly than previous years.  We have yet to see the waves of pike enter the skinny water to spawn in force on the south- central basin.  Most of the big pike caught this week were found on the first piece of structure or slightly deeper water just outside of the shallow water bays.  Minnow baits and cranks worked with a slower retrieve were often hit on the pause.  We have found some 50-degree water here and there, but 60 has been nearly nonexistent.

The Bass fishing on our end of the lake usually doesn’t start to become consistent until surface temps get above 60.  Even though it is still very early, we did pick up some random nice bass while walleye fishing.  Guide sheets recorded 26 over 17, including 5 – 19s and 1 – 20.

Opener is always a gamble.  With a cold spring, the beginning of the 2019 season was on average lighter on volume for all species.  Despite the cold start, we did see some big ones to kick the season off.

The take away:  I have spent many years watching ice go off lakes and it is never the same.  It always starts slow and speeds up at the end.  But stop and think about how much solar energy is required to melt off a 560 sq. mile sheet of ice that is 3ft. thick.  At the risk of stating the obvious, the power of the sun is astonishing.   When it doesn’t shine in spring the fishing is very tough, but just one or two days of brilliant sunshine, dramatically changes results.  We are waiting on the sun.