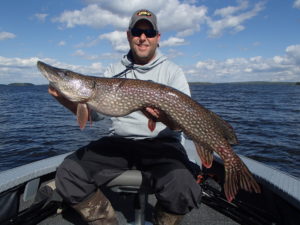 Lots of weather changes and winds from all points of the compass this week, add in some major thunderstorms and the best we can say is the weather was changeable.  There were also two days where we lost fishing time to those thunderstorms, and that kind of weather made walleye hard to pattern over the course of the week.  A lot of our guides responded to the unpredictable conditions by encouraging their guests to switch things up and take advantage of this prime week for trophy northern.

We love to hunt for big pike this time of year and our guide staff took every opportunity the weather and our anglers gave them to chase northern.  We found big fish mostly one stage deeper on rock during grey and windy days, and it took the right baits and knowledge of how to present them to consistently produce good fish off these structures.  Our catch locations quickly moved to the remaining weed patches and the successful presentations shifted back to classic baits as soon as the weather settled into something steady.  The pike shifted back and forth between rock and weeds a few times over the course of the week – and sometimes over the course of a day – as conditions changed, and production for big fish came when our boats were checking different kinds of structure all throughout each day.

As for the walleye, they were a struggle this week overall.  The bright spots were an increase in sheet volume at end of week and quality walleye returning to the main lake sand structures that have produced so well for us over the years.

With a smaller staff this time of year we recorded only 49 guided days this week, and half of them had their main focus on trophy northern.  For the week we caught and released 25 northern over 37 inches, with 6 over 40 inches, and topping out with a great looking 42.5 incher.  Looking back at the nightly reports this week a couple of our senior guide staff noted the number of super-giants out there that were moved and seen but not hooked up.

Another interesting note was an increasing trend of big bass caught off deep rock piles.  Numbers were few, but size was consistently good with 6 fish over 19 inches for the week.  The bass made a nice alternative for those anglers not interested in pursuing pike.