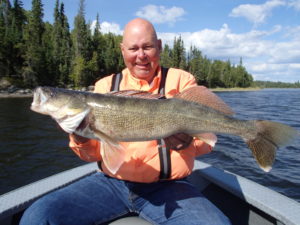 This time of year always sneaks up on me. Brett will write the weekly fishing reports for the month of Sept. and I will be back to my Fall guiding season in Iowa.

The weather forecasts this past week featured a new phrase; “local smoke” was mentioned often. Sometimes that is just a hazy afternoon and at other times it is so thick that visibility is limited to less than a few miles and you can taste it in the back of your throat. It continues to be dry throughout the region and the lake level appears to have reached its summer peak 2 ft. below normal. It would take a staggering amount of rain to bring it up to full pool. The forecast for next week mentions showers, but for now, the fire ban continues.

The walleye bite has changed little over the past month.   Main lake rock continues to be much more productive than main lake sand. The key depths have been around 30 ft, but we are seeing a few more walleyes moving shallower. For the week, we caught and released 24 over 27 in., including 3 – 28s, 4 – 29s, and 1 – 30. Volume continues to be steady with the sheets averaging 30 walleyes over 18 in. per day. There were some tough spells when guides marked 10 times more fish than they caught and then you would see a flurry.

The split this past week was 1/3 production with bigger jigs and Gulp vs. 2/3 of the walleye production on lighter jigs and minnows.

There was a bit of time spent throwing for pike this past week. Action for smaller fish was good and production for bigger fish was just OK with 3 – 38s and 1 – 39.

Overall, it has been a great season at the Wheel. We owe much of the success to an outstanding staff, especially the senior members of the crew. Both in the dining room and on the water, it has been a pleasure to work with them this summer. I know and appreciate that they make the difference and are the reason that the Wheel turns as smoothly as it does.