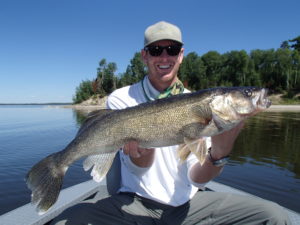 It is officially summer on Lac Seul:

The weeds are up and topped out.  It was a warm and sunny week with a few thunderstorms, some high winds, and a couple of extreme 180 degree wind switches.  And the Walleye bite is on.

It was another great week of walleye fishing in the south central basin.  Volume was high with guide sheets averaging 42 walleyes over 18 in. per boat per day.  The top end size continued to be excellent with the guide crew catching and releasing 51 walleyes over 27 in., including 11 – 28s, 3 – 29s, and 3 – 30s.  The percentage of 30 inch fish is up considerably this season.

Wind shifts are normal this time of year and they typically turn gradually from 10 mph South to 4 mph SW and then slide into 15 mph West the next afternoon.  This week was harsh.  We had 2 wind shifts that were 20 – 30 mph sustained one day, immediately shifting to stronger winds the opposite direction the next day.  There were even subtle micro shifts on days before and after.  The result is that the lake surface temps dropped from 74 to 65 and that means that there was a good mixing of the top 10 ft.

This week is usually the beginning of one of our windows of big pike production.  When the cabbage weeds top out, the show is usually on.  In practice, it was hit and miss this week.  Much of the lack of production can be blamed on the wind shifts.  There wasn’t much effort in play and we will see what happens next week.  The totals: 4 over 38, including one 39.  Nothing to write home about.

There wasn’t much time spent on pike last week, but there will be this week.

I always ask my first year guides for a “take away” from the round table meeting.  I already knew the answer this week and I was waiting to hear it.  Moving at speed with big Plastics is the fastest way to learn the key depth and presentation.