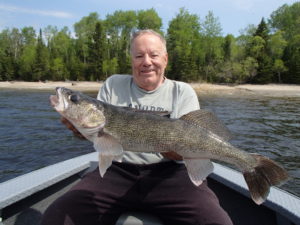 The start of the 2018 fishing season at the Wheel, was driven by a blazing spring heat wave that lasted for over 2 weeks. We began the week on fire ban and with consecutive days over 80 with high humidity. It was hot and there was very little wind. Surface temps soared into the 60s and 70s, even on the main lake. The walleyes are always on the move this time of year, but the difference is that they moved farther faster and sometimes bypassed their usual spring haunts. When water temps are 60 on the main lake, there is no real advantage for numbers of big walleyes to be stacked up in isolated backwater bays. They just keep moving on to areas where we typically find them in mid-June. And we did find them.

With the accelerated season, walleye fishing for both numbers and size were off the chart. For the week, we caught and released 65 walleyes over 27 in., including 13 – 28s, 5 – 29s, and 3 – 30s. Volume was also very good, with the average guide sheet reporting more than 40 walleyes over 18 in. per day.

On Thursday and Friday, regular Northwest Ontario spring returned. Air temps and water temps plummeted. We went from fishing in shorts and T-shirts to seven layers with long johns. On Wed. I was sweating through shorelunch and on Thursday you could see your breath when we talked through lunch.

Despite the dramatic change, walleye fishing remained quite good because of how much the water had warmed in the past few weeks. The rain that came with the cold front also thankfully ended the fire ban.

The pike fishing was much better at the beginning of the week than it was at the end. A few groups capitalized on the big pike moving to the transition areas just outside of the spawning bays and had good success. After the cold front passed, the only big pike being caught were incidental catch by walleye fisherman. For the week, we had 15 over 37 in., including 3 – 40s, 2 – 41s, and 1 – 42.

The smallmouth bass bite went on hold. We did have 9 over 19 in. caught, but most were incidental catch while walleye fishing. Guides did check in to early season bass spots and most were quiet.

The last week of May in 2018 will go down into our record keeping as one of the most productive bites that we have seen for big walleyes in many years. As always, weather is the key. The difference between now and 20 years ago, is that we are not just ready, but that we can’t wait to adjust.