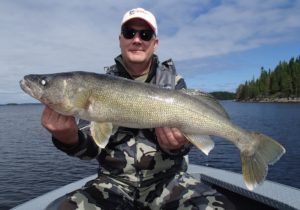 The rules of the photo board allow departing guests to pull the pictures of their fish when they leave and most do.  Before the board was decimated last week it was almost all bass.  Tonight, it was almost all nice walleye photos before the groups checked out.

The common theme for “what was learned at round table tonight?” this week was that we were often catching walleyes from dramatically different areas, depths, and with extreme presentations at the same time.  We caught walleyes dead sticking minnows on main lake sand in 20 – 30 ft.  We caught walleyes in front of the weeds in 9 ft. of water with big Gulp.  And we found good volume on mid depth sand flats with light jigs pulled at speed to cover water and contact suspended walleyes.  You really had to be on your toes this week to stay on fish.  There was a lot more “4 fish from 10 spots” than “30 from 1 spot this week”.

It is still a 50/50 split between Gulp and Minnows for volume, but the size goes to the Plastic.  For the week, we caught and released 55 walleyes over 27 in., including, 11 – 28s, 4 – 29s, and 2 – 30s.  Most of the really big fish fell for the 6.5 in. Nemesis.  A few ate the minnows.  But the key was to figuring out each day’s depth and bite preference.  When the fish are a bit more scattered, the guides tend to rely more on plastics and speed to solve the puzzle of the day.

Walleye volume was good again this week.  Guide sheets averaged 40 walleyes over18 in. per boat per day.

We did get some much-needed rain this past week, but the lake is still down just a little under 2 ft.  The lake level does not really affect the walleyes this time of year, but the quality and depth of the weed beds are a major factor for big pike.  Some traditional summer spots are great, but others are not holding the size of fish we expect.  There was not a great deal of effort spent chasing pike this past week and the results were limited.  For the week we caught and released 5 over 37 in.

Last week we did have several groups that chased smallmouth bass and did very well.  This week, the groups were much more focused on walleyes.  Between the effort and the weather, bass numbers fell off sharply.  For the week we caught and released 11 over 19 in.  There are still a few out there to be caught, but there may not be the anglers around to hunt for them.  The mayfly hatch is the environmental indicator that we watch for to let us know that the bass bite is in decline.  The hatch has already occurred in some of the warm water bays and is just beginning on the main lake.  As noted in previous year’s reports, the mayfly hatch has virtually zero affect on our walleye production.