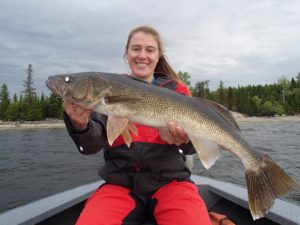 It is always the weather, so I might as well talk about that first.  It feels like late spring / early summer on Lac Seul right now.  The weather has been beautiful and the fishing has been great.  I actually looked back and read the previous week’s reports and the take away for me was that the early season weather was volatile and that this week was much more normal.  We did have some windy days early, some rain in the middle, and some calmer days at the end, but nothing felt extreme.

Especially towards the end of the week, main lake sand cups in the 10 – 15 ft zone really took off for walleyes.  Even if the wind was light, you had to have it blowing into a dead end zone.  Without the wind, there was very little action.  Add a perfect wind to a Grade C- spot with a quick break into 10 ft. and a guide might put 30 walleyes on his sheet (and often did).

As a crew, we were pretty much 50/50 this week on Gulp @ speed vs. 1/8 oz. jigs and minnows.  Earlier in the week, the Gulp helped to pick off aggressive walleyes on wind blown shorelines.  Later in the week, we used Gulp to contact scattered walleyes on flats.  At the same time, other guides found walleyes deeper on breaks that had been exposed to wind the previous day and were able to catch neutral to negative fish deeper.  The trick was to run a dozen experiments with your group every day and evaluate the results and adjust as you go.  The guests like it.  It makes the day fun.  And it works.  The 4 in. Gulp served a purpose, but the 6.5 in. Gulp was a proof.  If you found a group of walleyes that would hit the big baits, then you knew you could move at speed and work to target big fish.

The Bass are just starting to come in shallow on a regular basis.  Some boats did well this week.  Some areas that have been excellent in the past were tough.  The lake is about 1ft. lower than normal and some of our classic bass spots are choked with weeds.  The bass are still there, but it is just tough to catch them.  For the week, we caught and released 15 over 19 in.

Transition pike are often tough.  The weeds are up in the back bays and about half way up on the main lake.  The big pike can be anywhere and that is where they were.  For the week, we caught 7 over 37 in. including 1 – 42.

The theme at check out was the same for every group this week; great trip, can’t wait to come back….  My response was the reminder, that even on the best fisheries, the weather during your short stay can make fishing tough or make it great.  I do my best to report the fishing as it is and manage expectations for those groups that return year after year.

No one, ever goes back to a lodge hoping that they will catch ½ as many fish that were almost as big as last year.  The groups that have been up for 10 – 20 years know the drill.  They don’t doubt the fishery or the guides, they just know that it is fishing and that sometimes the fish are snapping and sometimes they aren’t.  Those are the easiest groups to guide and this time of year the schedule is packed full of them.