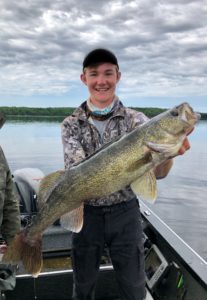 Instant Summer turns back into Regular spring: And then we experience a massive cold front

How big of a cold front was it? Main lake temps that were in the 60s and up to 70 plummeted to 48 degrees. For those of you that have fished through one of these weather events before, the results are 100% predictable. The blender affect sends fish everywhere and anywhere all at the same time.

During the front, the fishing was excellent, but after the front passed and the winds died and the lake turned flat calm and cool, finding biting fish became much more of a challenge. The average depth was the biggest change that we had to solve for. Last week, most walleyes were caught between 5 – 10 ft. By the middle of this week, most walleyes were being caught between 12 and 20 ft deep. Guides reported catching walleyes as deep as 30 ft. Post frontal walleyes that go deep are almost never active this time of year. The good news is that they are deep enough that you can find them and mark them with electronics. The bad news is that you have to slow way down to consistently catch them. It is warming up again and we are just starting to see some pollen returning to the surface of the lake. As an environmental indicator, you can do no better than chasing pollen on the water to find shallow water walleyes.

Most walleyes were caught with 1/8ths and 1/4s oz jigs with minnows. There were a few experiments pulling Gulp at speed. The 4 in. Nemesis had steady results, but there were a few windows where the 6.5 in. Nemesis were key to catching big walleyes.

We were still able to solve the walleye puzzle, but the post spawn / transition / lake blender combination was difficult to crack for big pike. There were a few nice pike targeted, but they were few and far between. The majority of the bigger pike this week were incidental catch while walleye fishing with 4 – 37s, 1 – 39, and 1 – 40. An exception was a 45 in. monster targeted and caught by Jim Layton at the end of the week.

And if the Pike were a challenge, then it felt like the Smallmouth bass packed up and moved to another lake. A few guides spent some time checking the shallows with almost no success. There were hardly any boated accidentally. For the week, there were just 3 – 19s caught. Their time will come soon.

Statistically, the sample set is very small, but it does feel like we are seeing more really big walleyes at the beginning of this season. Time will tell, but it has been a great start of the year for trophy walleyes.