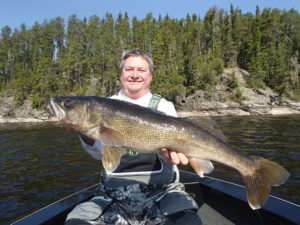 In the month of April, I obsessively follow the Dryden 14 day forecast, webcams, daily Modis satellite imagery, Lake of the Woods ice patrol, and the Minnesota DNR website that reports ice out for lakes in Minnesota. Over the years, I have been able to predict the ice out within a fairly narrow range of days. On April 20, my predicted ice out was for May 25.

I arrived at the lodge on May 1. It turned to Spring on May 2 and 3. Since then, it has been summer. I counted 2 mornings with frost, and 7 days above 80. The ice went out incredibly fast and the entire lake was ice free by May 15. It felt like summer for the entire week of walleye opener.

In the main lake basin, the spawn for both pike and main lake walleyes happened at the same time. If I had to guess, I would tell you that both are just about complete at the time of this report. We have already seen a few walleyes on transition spots and post spawn pike on primary and secondary points outside the shallow spawning zones. It happened fast.

I had a few groups get nervous and balk on opening week, but we opened on the 19th and with the warm weather, the fishing was good. For the week, we caught and released 32 walleyes over 27 in., including 7 – 28s, 1 – 29, and 2 – 31s. Overall volume was good considering that many groups spent more than half their time chasing pike.

We haven’t really begun to target Smallmouth Bass yet, but it seems that there are more and more around every year. To date, we have released 3 over 19 in., including 1 – 20.5.

Lake levels are just a bit below normal for this time of year and the warm dry weather has put us on an early Fire Ban.

I have watched almost 30 ice outs in Northwest Ontario. This spring and ice out have been one of the most extreme outliers that I have seen. It does make fish location and the bite less predictable, but the guiding knowledge we have accumulated over the years is a powerful counter balance. For me, finding them is still half the fun.